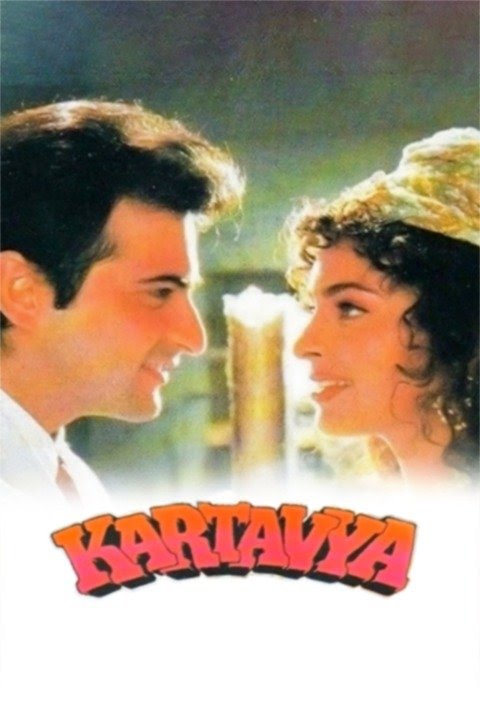 Karan learns that he was adopted and that his birth mother was wrongly committed to a mental asylum so that her step-brother could inherit her fortune. Karan vows to avenge the injustice done to her.

Kartavya (English: Duty) is a 1995 Indian action film directed by Raj Kanwar, starring Sanjay Kapoor and Juhi Chawla. Divya Bharti was chosen as the female lead, she completed some 30 percent of the movie, but due to her sudden death she was replaced by Juhi. Rediff.com found the film “embarrassing”.

Karan (Sanjay Kapoor) and Kajal (Juhi Chawla) are in love and ready to settle down and lead a happy life. But tragedy strikes as Karan’s mother has a heart attack and before she dies, Karan discovers that she wasn’t his real mother. He is told that his actual mother is an heiress, Gayatri Singh (Aruna Irani), who lives in Sundernagar. Karan sets out for Sundernagar to confront her and on reaching there, comes to know the tragic story of his mother’s life. Her stepbrother, Ugranarayan Singh (Amrish Puri) had killed her husband and had her thrown in a mental asylum so that he can inherit all the wealth. Karan must now punish the people responsible for his mother’s morbid state. Will Ugranarayan Singh be brought to justice? Can Karan and Kajal’s love survive the fury of vengeance?

Be the first to review “Kartavya Dvd” Cancel reply