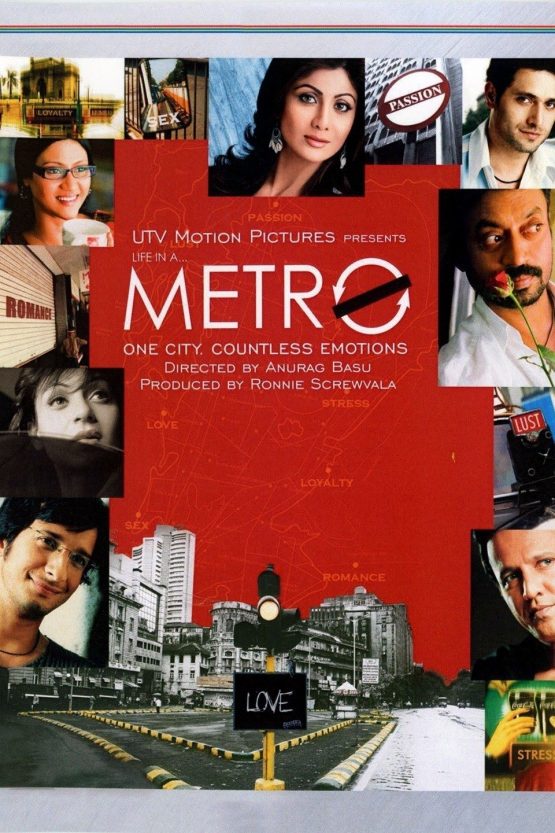 Life In A… Metro Dvd

The lives of nine people living and working in the city of Mumbai change drastically when their fates intertwine with each other. However, they are determined to rise above their emotions.

Life in a… Metro is a 2007 Indian ensemble musical drama film co-produced, written and directed by Anurag Basu, and set in Mumbai, India. It features an ensemble cast of Dharmendra, Nafisa Ali, Shilpa Shetty, Shiney Ahuja, Kay Kay Menon, Kangana Ranaut, Sharman Joshi, Konkona Sen Sharma and Irrfan Khan. The music is composed by Pritam with lyrics by Sayeed Quadri. The film was released on 11 May 2007. It narrates the lives of 9 people living in Mumbai and deals with topics like extramarital affairs, sanctity of marriage, and love. The film was critically acclaimed for its story, screenplay, music and performances of the ensemble cast. The general plot and a number of characters are based on 2 classic Hollywood films, Brief Encounter (1945) and The Apartment (1960).

The story takes place in Mumbai city, which is evident from the title.

Rahul, who is eager to move up the ranks in his call center job, lends his apartment to people connected to his boss, Ranjit, for bringing their girlfriends and affair interests in turn for recommendation. He silently loves Neha, his colleague, who has risen up in the ranks easily due to her relationship with Ranjit.

Ranjit is very unhappy with his marriage with his wife Shikha (he has an eight-year old daughter), so he started an illegitimate relationship with Neha. The only problem is that he doesn’t have any place to take her to. When he hears about what Rahul does, he calls him to his office and says that he will expose what Rahul does in his apartment unless he lends it to him. Rahul agrees and Ranjit promotes him. Unfortunately, he does not know that Ranjit’s affair interest is Neha.

Shikha, who often meets her aunt in her Bharatnatyam classes, reads out a letter from The United States for her aunt. She learns through the letter that her aunt, Shivani, had loved a man named Amol forty years ago, but he left her to pursue his dreams in the US. Now Amol and Shivani, who are both in their seventies, are counting their last days. Amol conveys through the letter that he is probably coming to India for the last time and wishes to meet Shivani and spend his last days with her. Shivani agrees.

Shikha’s sister, Shruti, is twenty-seven and very eager to get married and meets many prospective grooms. Among one of them is Monty, who Shruti finds very weird and old. Shruti is also Neha’s roommate and Neha often indirectly conveys her guilty feelings of starting an affair with Ranjit, which Shruti does not understand.

Shikha accompanies her aunt to the railway station where Shivani is asked by Amol to meet her. While Shikha is away to buy magazines, Shivani sees Amol in the opposite platform. Instead of coming through the walk path, he gets down onto the tracks and crosses them to the other platform to meet her. This is watched by Shikha, who feels happy seeing the scene.

One day, Shikha meets Akash, an unsuccessful theatre artist and a divorcee at a bus stop. He practices drama with his friends in the floor above Shivani’s Bharatnatyam classes. They start off as friends, but slowly start getting close and visit places non-romantically.

Shruti has a crush on her boss, who often tries to set her up with men for her to go out with, but the idea fails. One day, Shruti visits her boss’s home to convey her feelings, but is shocked when she discovers her boss in bed with another man, showing that he is gay. Shruti immediately quits her job and enrolls in a new company. There, she discovers that Monty also works there. Monty helps her get the job with his relations with his boss and they become friends. Monty also conveys that his mother has found an ideal bride for him, and asks Shruti’s help with the wedding shopping. After the wedding shopping, they sit on a seashore and drink and smoke. When Shruti confronts him, he says that he will quit if his wife wants him to after marriage and respect whatever his wife says. Shruti, moved by this statement, slowly starts falling for Monty.

During one of Ranjit and Neha’s trips in Rahul’s house, Neha forgets her phone. Rahul finds it in his house and gives it to Ranjit, who in turn asks someone to give it to Neha. Rahul, who witnesses this, realizes that Ranjit’s girlfriend is Neha and gets heartbroken.

During another trip in Rahul’s house, Neha asks Ranjit about their future, at which point Ranjit says that they are doing it only for pleasure, and says that Neha has used him for promotions. When Neha retaliates by saying that she was the one being used, Ranjit insults her and says that she hasn’t only asked him for money, which he throws on Neha. Neha, upset, attempts suicide by drinking phenyl.

Rahul, who is upset, brings home a prostitute. When he enters the bathroom to fetch a condom, he finds Neha who has attempted suicide. He immediately drives out the prostitute and calls his neighbour who is a doctor; they are able to save Neha by making her vomit and admit her in a hospital. Rahul calls up Ranjit, who has left for Bangalore due to an urgent business, who tells him to take care of Neha for a few days. Shruti realizes that Neha hasn’t come home.

One night, Amol visits Shivani, who asks him to spend the night with him, which he does. In the morning, Shivani wakes up and experiences some pains, at which point Amol calls for an ambulance. Realizing that she is going to die, Shivani says that her last wish is to die in Amol’s arms, which she does. Amol is gravely disturbed and depressed. He pressures the topic of love to Shikha and Shruti and regrets leaving Shivani forty years ago.

Rahul, meanwhile, starts taking care of the recovering Neha and they form a special bond. One day, Rahul takes her to the outskirts of the city to an unfinished house. Rahul explains to Neha that his father’s dream was to build a good house or a restaurant, and he had invested everything into this house. But he didn’t have enough money to complete the ceiling and a few parts of the house. Now, Rahul is determined to fulfill his father’s dream. This moves Neha.

Shruti manages to track down Neha in Rahul’s house. Realizing that she has attempted suicide, Shruti misunderstands the situation and scolds Rahul and slaps him, which Neha watches with confusion. While calling for a cab outside the apartment, she sees Ranjit (who has returned) approaching Neha and inquiring her, which makes Shruti realize that Ranjit was having an affair with Neha and not Rahul and that Ranjit was the reason.

Meanwhile, Shikha visits Akash in his home, where they get physically close. Just before they get even more intimate, Shikha realizes her boundaries and leaves Akash’s home. She comes home crying.

Ranjit, who has arrived at home, sees Shikha crying and misunderstands that Shruti has told about Ranjit’s affair. Ranjit then confesses himself. After confessing, Shikha says that Shruti never told her anything and confesses her friendship and closeness with Akash.

Ranjit, enraged, decides to move in with Neha.

Monty announces his wedding date to Shruti, who has fallen for him.

Rahul, upset with the way the city has treated him, decides to leave Mumbai by train.

On the day of Monty’s wedding, Rahul decides to leave, Ranjit decides to move in with Neha, and Akash sends Shikha her handbag which she left in Akash’s house. He also sends her a letter that says that he is ready to accept her the way she is: a housewife, or as a modern girl. He also writes that he has been offered a job in Dubai and he is ready to leave for the airport by train and she must come with him.

In the railway station, Monty chases Shruti, Neha chases Rahul, and Shikha searches for Akash. While searching for Shruti, Monty bumps into Rahul, which causes Rahul’s suitcase to break open. While putting back the clothes into his suitcase, Neha also arrives and romantically helps Rahul with his clothes, hinting that Rahul is not going to leave Mumbai.

Monty finally finds Shruti in a ladies compartment and enters it. They realize their love for each other and hug, causing all the ladies around to break into a huge applause.

Shikha finds Akash, but tells him that she is not going to come with him and wishes him the best for his job in Dubai And leaves.

The movie ends with Rahul and Neha eating dinner with his parents, Shikha and Ranjit in a happier marriage, Shruti and Monty, who have married, waiting in a traffic signal with their three-year old child and Akash still roaming the streets of Mumbai.

Amol remembers Shivani and is seen sitting on the same bench in the railway station Shivani sat when he met her. In the station, he sees a young man crossing the tracks like Amol did and uniting with his girlfriend. This makes Amol smile and he moves on.