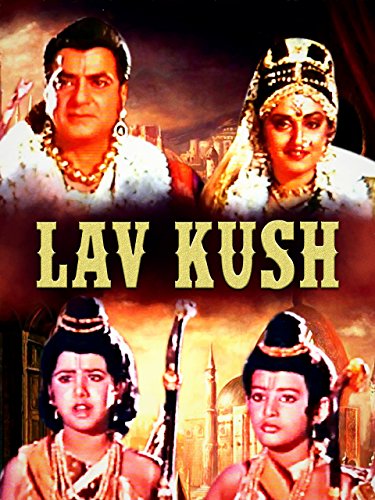 Luv and Kush, the sons of Lord Rama and Sita, support their mother during her exile from Ayodhya. When they visit Ayodhya, a shocking truth is revealed to them.

Lav Kush is a 1997 Indian Hindi-language Hindu mythological film, produced by Dilip Kanikaria under the Devyank Arts banner and directed by V. Madhusudhan Rao. It stars Jeetendra, Jaya Prada and music composed by Raamlaxman. The film is based on Valmiki’s Uttar Ramayan from the Epic Ramayana, various films and serials have been made with this concept in almost all Indian languages, since 1950 to 2011.

The story begins after Lord Sriram defeats Ravana, he returns to Ayodhya along with Goddess Sita and crowned as the emperor, settles down to a harmonious lifestyle along with his biological and foster mothers, three brothers; Lakshman, Bharat and Shatrughan and their wives. When his spies inform him that his reputation may be at stake as Sita had spent over a year in Ravana’s Lanka, he asks a reluctant Lakshman, to ensure that Sita is sent to exile. A devastated, pregnant, and distraught Sita is rescued by Maharishi Valmiki, who takes her to his Ashram and renames her Lokpavni, where she subsequently gives birth to two sons, Kush and Lav. Valmiki trains them in every possible way, including knowledge, warfare and religion. Ten years later, the twins decide to visit a drought and famine-ravaged Ayodhya to get the blessings of Sriram and Sita as well recite the Ramayan and this is where they will find out that Sriram has exiled Sita, and they return home disappointed and refuse to recite the Ramayan anymore. The twins then stop the Aswamedha horse, not realizing that they will soon be thrust into confrontation with none other than Lakshman, Sriram, Lord Hanuman and the entire army of Ayodhya.

Be the first to review “Luv Kush Dvd” Cancel reply