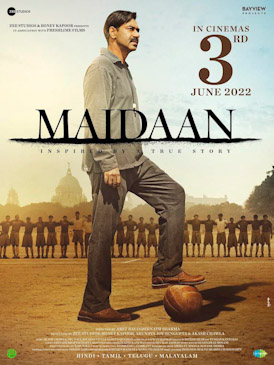 Maidaan is inspired by the Indian national football team coach and manager Syed Abdul Rahim, who is regarded as the architect of Indian football.

Maidaan (transl. Field) is an upcoming Indian Hindi-language biographical sports film based on the golden era of Indian football (1952–1962) and starring Ajay Devgn as football coach Syed Abdul Rahim. Maidaan is directed by Amit Sharma and produced by Zee Studios in collaboration with Bayview Projects LLP. Shooting commenced on 19 August 2019, and the film is scheduled for worldwide release in theatres on 3 June 2022.

Be the first to review “Maidaan dvd” Cancel reply