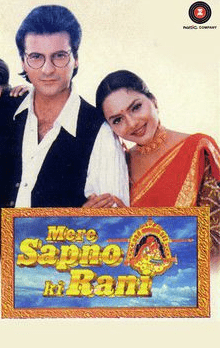 Mere Sapno Ki Rani(English: Queen of my dreams) is a 1997 Indian Hindi film directed by K. Raghavendra Rao and produced by Allu Aravind and C. Ashwini Dutt. It stars Urmila Matondkar, Sanjay Kapoor and Madhoo in lead roles. The film was a remake of Telugu film Pelli Sandadi.