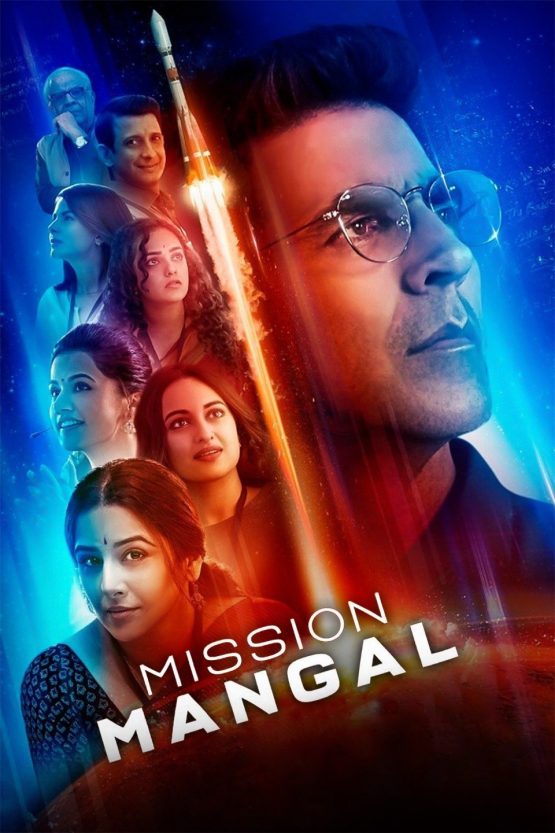 A group of scientists at ISRO battle in their personal and professional lives and work tirelessly towards their only motive, the Mars Orbiter Mission.

Mission Mangal was announced in November 2018. Shakti, who worked as associate director on Pad Man (2018), pitched the script to Kumar. Principal photography for the film began in November 2018. The film’s soundtrack was composed by Amit Trivedi and Tanishk Bagchi with lyrics written by Baghchi along with Amitabh Bhattacharya, and released under the banner Zee Music Company. Mission Mangal was theatrically released in India on 15 August 2019, India’s Independence Day. It received positive reviews from critics and earned ₹290.59 crore worldwide, becoming a commercial success.

After the failed launch of GSLV-F06 on 25 December 2010, due to a small mistake by Project Director Tara Shinde, Rakesh Dhawan, a fellow scientist working with her, takes the blame for her. As a result, he is relocated to work on Mangalyaan as punishment. The new GSLV missions are given to Rupert Desai, a NASA scientist of Indian origin. The MoM (Mars Orbiter Mission) is thought of as an impossible mission by his coworkers due its aim of reaching Mars with its tight budget.

Rakesh learns that MoM cannot take off on the PSLV since the available technology has a payload of only 1500 kg and not enough fuel to fire the rocket to be carried to a distance of almost 5.5*10^7 kilometres. GSLV, if it had succeeded, could have taken the satellite to Mars as it had a payload of 2300 kg. However, recent significant failures of GSLV have jeopardised the planned future missions.

Back at home, Tara is badly caught in between balancing her career and her family. One day at home, while frying ‘Puris’, Tara’s maid informs of insufficient gas to cook all the ‘Puris’, to which Tara tells her to heat the oil and turn off the gas, and turn it back on if oil cools down, which sparks her an idea to launch the MoM using PSLV. They would use bursts of gas to push the MoM satellite further into Earth’s outside orbit, and then slingshot it using Earth’s gravitational sphere, successfully saving fuel. She approaches Rakesh with the idea, who is convinced. The duo tries to get the other team members on board, but instead are mocked, though they later are convinced too along with Director of ISRO. When Tara and Rakesh ask Rupert to lend them expert members of his team, Rupert instead gives them junior scientists and engineers, who have little to no experience in mission launches.

First, there is Eka Gandhi, propulsion control expert, a youngster that hates most Indian things and looking for any chance to get away to NASA. Then there is the spacecraft autonomy designer Neha Siddiqui, who is struggling with rejection as a result of her intercommunal background. Navigation expert Krittika Agarwal is a devoted wife tending to her ex-serviceman husband Rishi Agarwal, who was severely wounded in action. Varsha Pillai, the satellite designer and payload expert, battles with her mother-in-law’s taunts at home for not being able to bear a child. Parmeshwar Joshi, payload expert, relies more on the priest and his advice to and develops a romantic interest in Eka. Lastly, there is Ananth Iyenger, the team’s structural engineer.

However, after the announcement of India’s second Moon mission, Chandrayaan-2, the mission’s budget is cut by 50%. In between the tight schedule and minuscule budget, Tara and Rakesh continue to work on their MoM project by making several compromises. Tara and Rakesh realise that the junior scientists working on the project have low morale and motivation to make this mission happen, leading to the team slowing down. Tara soon realises that in order to meet their budget and schedule, she must make the team members change their attitudes, and motivate them to make their dream jobs into a reality. She is successful with this, and the team puts all their hardwork and energy into solving the issues with the mission, and making it happen.

The MoM satellite is finally launched on PSLV on 5 November 2013 (after an 8-day delay due to weather), and is named Mangalyaan (Sanskrit: Mars-Craft) and is successfully inserted into Earth’s orbit. Rakesh and his team celebrates the successful launch. However, while doing the sixth orbit-raising manoeuvre, the jets fail to launch, pushing the mission 6 days behind. Rupert mocks the team, while Tara continues to keep hope that something will happen. Couple months later, on the way to Mars, the satellite is hit by a solar radiation wave, heavily damaging the communication systems of the satellite. When the team manages to regain communications, they realise that the solar radiation had increased the speed of the satellite and pushed it further, making up the 6 day gap they had incurred while doing the orbital manoeuvres with Earth. After spending 298-day transit to Mars, MoM satellite is inserted into Mars orbit on 24 September 2014, making the country 4th in the world to do so and the first country to do it in the first attempt.

Be the first to review “Mission Mangal Dvd” Cancel reply