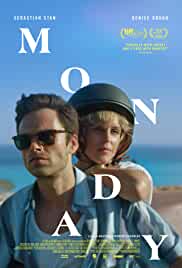 A spark on a Friday can lead to a sizzling weekend fling, but what happens when you get to the inevitable Monday?

Monday is a 2021 drama film directed by Argyris Papadimitropoulos, from a screenplay he wrote with Rob Hayes. It stars Sebastian Stan and Denise Gough.

The film had its world premiere on September 11, 2020, at the Toronto International Film Festival as part of TIFF Industry Selects. It was released in the United States on April 16, 2021, by IFC Films. The film received mixed reviews from critics.

When Mickey is introduced to Chloe one hot summer night in Athens, the attraction between the pair is immediately palpable — so palpable that before they know it they’re waking up naked on the beach on Saturday morning.[4]

Sebastian Stan as Mickey
Denise Gough as Chloe
Dominique Tipper as Bastian
Vangelis Mourikis as Takis
Andreas Konstantinou as Christos
Syllas Tzoumerkas as Manos
Sofia Kokkali as Stephanie
Production
In August 2018, it was announced Sebastian Stan and Denise Gough had joined the cast of the film, with Argyris Papadimitropoulos directing from a screenplay he wrote alongside Rob Hayes.

Be the first to review “Monday Dvd” Cancel reply