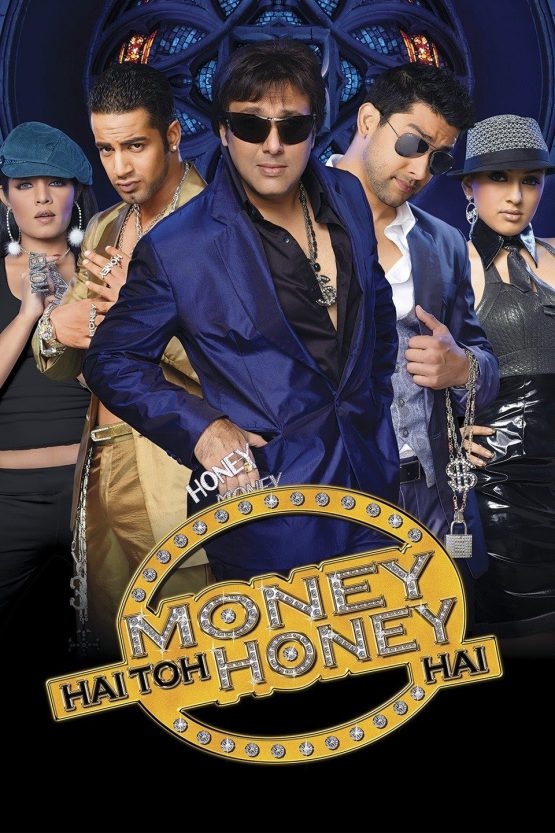 Six struggling people get an SMS informing them that they are now the owners of an INR 1,000-crore company. But the company has a loan of INR 1,200 crore, which they must repay.

Money Hai Toh Honey Hai (transl. If You’ve Got the Money, You’ve Got the Honey) is a Bollywood comedy film directed by Ganesh Acharya and produced by Kumar Mangat, story and screenplay by Muazzam Beg. It features a cast of stars including Govinda, Aftab Shivdasani, Upen Patel, Hansika Motwani, Celina Jaitly and Manoj Bajpayee in the lead roles with Ravi Kissen, Antara Biswas and Prem Chopra in supporting roles. Esha Deol and the director of the film Ganesh Acharya make special appearances.

Money Hai Toh Honey Hai is a comedy that deals with the lives of six individuals. Bobby Arora (Govinda) is a happy-go-lucky guy who runs away from home to prove himself as a can-do child. Lallabhai (Manoj Bajpayee) becomes wealthy after his lottery win of 1 crore rupees, but he goes back on the streets after his business fails and he loses all his money. Gaurav (Aftab Shivdasani) is a copy writer who is fired from his job. Manik (Upen Patel), is a struggling model who sleeps with a middle-age fashion designer, Dolly (Archana Puran Singh), and hopes to make it big. Ashima Kapoor (Hansika Motwani) is a successful TV star, but she’s not happy with her career and is desperate to star in films. Shruti (Celina Jaitly) is a struggling dress designer.

One day, they all get an SMS informing them that they are the owners of Shahenshah Jaiswal’s (Prem Chopra) 1000-crore company. However, their happiness does not last long, for their lawyer reveals that there’s a loan of 1200 crore on the company and they must repay it. Until the loan is repaid, they will be kept under house arrest. So, using the extra cloth left from a failed shipment to Korea, they make garments.((unclear)) But not just any, the type they make is enough for an ordinary person to buy. They display that in a fashion show, getting ordinary people from the street. At the end, they succeed and keep on making more stores for other parts of India with the help of the bank. The movie ends with Bobby and Ashima getting married.