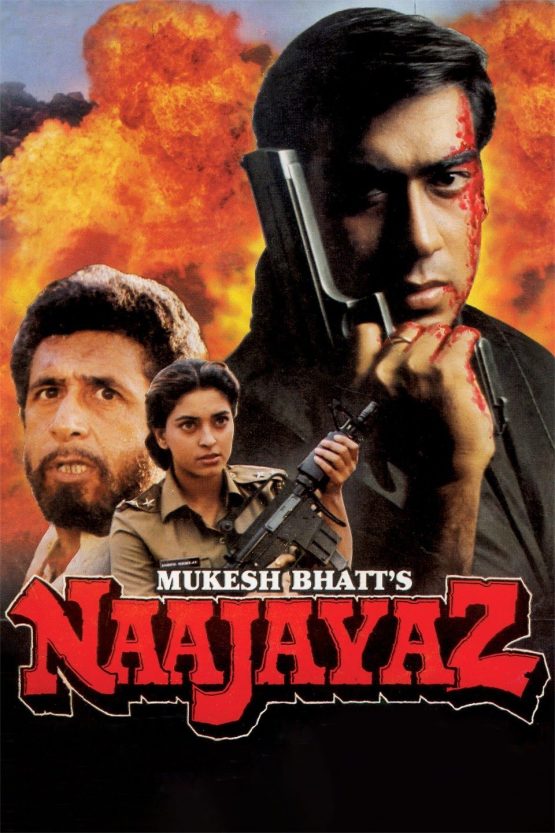 Jai and Sandhya are on the case of taking down Raj Solanki, a gangster. However, things take an unexpected turn when Jai finds out that Raj is his father.

Naajayaz (transl. Illegitimate) is a 1995 Indian action thriller film directed by Mahesh Bhatt and produced on a budget of ₹26.8 million.It was a huge hit at box office. It stars Ajay Devgn, Naseeruddin Shah, Juhi Chawla, Deepak Tijori, Gulshan Grover and Reema Lagoo. Naajayaz was theatrically released in India on 17 March 1995 to positive reviews from critics. It was a commercial success grossing over ₹134.9 million worldwide. Naajayaz received two nominations at the 41st Filmfare Awards: Best Actor for Devgn and Best Supporting Actor for Shah.

Inspector Jai (Ajay Devgn) is an upright and fearless cop who is given the job to take down the criminal empire of Raj Solanki (Naseeruddin Shah). Jai and his accomplice Inspector Sandhya (Juhi Chawla), who also happens to be his love, start taking down Raj’s empire with gusto. But Raj’s cronies and benefactors are not the only ones to be upset by this.

Raj has problems of his own. He does not want his son (Deepak Tijori) to turn into a criminal like him. Raj is also aware of his minion’s (Gulshan Grover) discontent; he wants to start many criminal activities that even Raj will not do. Raj tries to stop Jai without applying pressure or brutality, only to meet Jai’s mother (Reema Lagoo) and realize that Jai is his son. Now Raj finds himself in a real tight spot.

Jai’s mother does not like Jai trying to take down Raj, but Jai is determined. After some time, Jai learns about his relationship with Raj, but continues his job nonetheless. Raj’s legitimate son and his minion try to take down Jai individually, without knowing the secret.

How the story ends forms the plot of this film.

Be the first to review “Naajayaz Dvd” Cancel reply