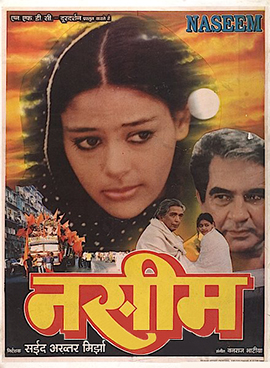 Naseem, a schoolgirl, grows up hearing the stories of pre-independence communal harmony. Later, she helplessly watches the communal situation regressing with the demolition of the Babri Masjid.

The film is set between June and December 1992, the days preceding the infamous demolition of the structure of Babri Masjid at Ayodhya in the Indian province of Uttar Pradesh by misguided groups. The relationship between Naseem, a 15-year-old schoolgirl belonging to a middle class Bombay based Muslim family and her ailing grandfather takes the story forward as the family watches with increasing horror on their TV the news of the growing tension between Muslims and Hindus. The grandfather keeps regaling her with stories of life marked by communal harmony in the pre-independence city of Agra. As communal tension erupts in the city of Bombay, Naseem notices changing dynamics at her school and in the neighborhood, while her grandfather watches helplessly at a city getting deeply divided on communal lines. The old man dies on 6 December coinciding with the news of the destruction of the mosque.

Be the first to review “Naseem Dvd” Cancel reply