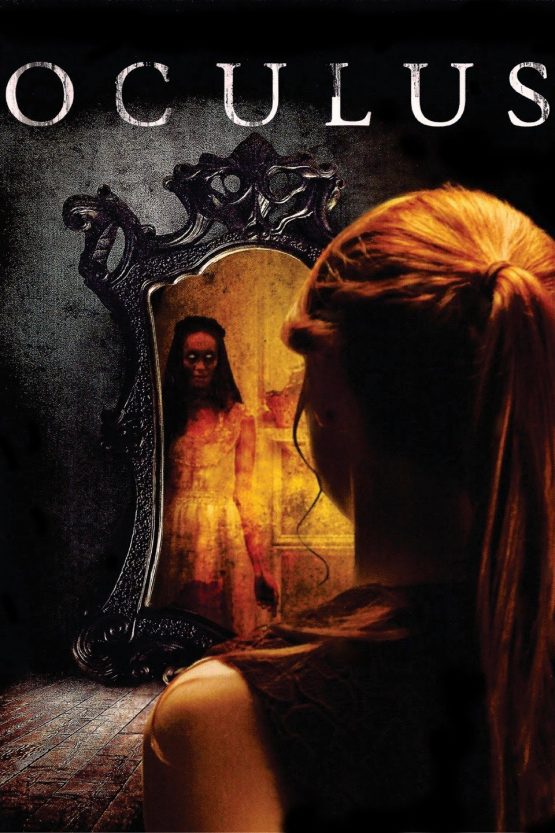 Haunted by the violent demise of their parents 10 years earlier, adult siblings Kaylie (Karen Gillan) and Tim (Brenton Thwaites) are now struggling to rebuild their relationship. Kaylie suspects that their antique mirror, known as the Lasser Glass, is behind the tragedy. The seemingly harmless reflections contain a malevolent, supernatural force that infects the mind of anyone who gazes into it. As Kaylie gets closer to the truth, the siblings become caught in the mirror’s evil spell.

Oculus is a 2013 American supernatural psychological horror film co-written, edited, and directed by Mike Flanagan. It is based on his short film Oculus: Chapter 3 – The Man with the Plan, and stars Karen Gillan as a young woman who is convinced that an antique mirror is responsible for the death and misfortune that her family suffered.

The film takes place in two different times: the present and 11 years earlier. The two plot lines are told in parallel through flashbacks.

In 2002, software engineer Alan Russell moves into a new house with his wife Marie, 10-year-old son Tim, and 12-year-old daughter Kaylie. Alan purchases an antique mirror to decorate his office. Unbeknownst to them, the mirror supernaturally induces hallucinations. Marie is haunted by visions of her own body decaying, while Alan is seduced by a ghostly woman named Marisol, who has mirrors in place of eyes.

Over time, the parents become psychotic; Alan isolates himself in his office, and Marie becomes withdrawn and paranoid. All of the plants in the house die, and the family dog disappears after being shut in the office with the mirror. After Kaylie sees Alan with Marisol, she tells her mother, and the parents fight. One night, Marie goes insane and attempts to kill her children, but Alan locks her away. When the family runs out of food, the children realize that their father is under the influence of the mirror, so Kaylie goes to seek help from their mother, and finds her chained to the wall, acting like an animal. Kaylie and Tim try going to their neighbors for help, but the neighbors disbelieve their stories. When Kaylie attempts to use the phone, she discovers that all of her phone calls are answered by the same man.

One night, Alan unchains Marie, and both parents attack the children. Marie briefly comes to her senses, only to be shot dead by Alan. The children try to destroy the mirror but it tricks them, making them believe they are hitting the mirror when they are actually hitting the wall. Alan also experiences a moment of lucidity and kills himself by forcing Tim to pull the trigger of the gun and shoot him, causing a small crack in the corner of the mirror in the process. Before dying, he begs the children to run, but Marisol and other victims of the mirror appear as horrific ghosts. The police arrive and take Tim into custody. Before the siblings are separated, they promise to reunite as adults and destroy the mirror. As Tim is taken away, he sees the ghosts of his parents watching him from the house.

In 2013, Tim is discharged from a psychiatric hospital, having come to believe that there were no supernatural events involved in his parents’ deaths. Kaylie has spent most of her young adulthood researching the history of the mirror. Using her position as an employee of an auction house, she obtains access to the mirror and has it transported to the family home, where she places it in a room filled with surveillance cameras and a “kill switch” — an anchor weighted to the ceiling. Kaylie intends to destroy the mirror, but first wants to document its powers, proving Tim’s innocence.

Tim attempts to convince Kaylie that she’s wrong and the siblings argue. When they notice the houseplants begin to wilt, they review the camera footage and see themselves performing actions they have no memory of. Tim finally accepts the mirror’s supernatural power and attempts to escape the house with Kaylie, only for the pair to be drawn back by the mirror’s influence. Seeing a hallucination of her mother, Kaylie stabs it in the neck, only to realize that she has stabbed Michael, her fiancée who has come to check on her. They try to call the police, but are only able to reach the same voice who spoke to them on the phone as children.

At this point, they see their doppelgangers inside the house standing in front of the mirror. Realizing that the 911 call is not going through, they go back inside the house. Kaylie and Tim begin hallucinating by seeing younger versions of each other. They get separated, and each of them relives the nightmare from their youth. Tim awakens alone in the room with the mirror, while simultaneously a younger Kaylie hallucinates her mother beckoning her from the mirror.

Tim activates the kill switch, realizing too late and unable to see that Kaylie stood in its path, and he has killed her. The police arrive and arrest Tim, who is hysterical, just as they did when he was younger. As both a boy and an adult, Tim claims the mirror is responsible. As he is taken away, Tim’s adult incarnation sees Kaylie’s ghost standing in the house with his parents.

Be the first to review “Oculus Dvd” Cancel reply