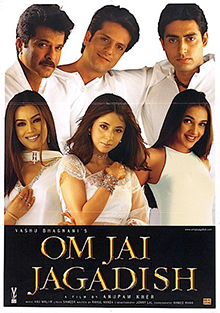 Widowed Mrs. Saraswati Batra (Waheeda Rehman) has brought up three sons with a lot of care and love.

Saraswati Batra (Waheeda Rehman) is the widowed mother of Om (Anil Kapoor), Jai (Fardeen Khan) and Jagadish (Abhishek Bachchan). Om is responsible and provides the income for the whole family. He works in a music company owned by his friend, Shekhar Malhotra (Parmeet Sethi). Jai is very ambitious (he wants to construct the world’s fastest car) and is studying in the United States. His education is paid by Om for which he has taken loan from Shekhar Malhotra. Jagadish is a college student who is very good with computers. Jai soon returns after Om and his mother convinces him.

They all want different things and soon Om and Jai marry. Om marries the bubbly Ayesha (Mahima Chaudhry) MTV VJ and Jai marries Neetu (Urmila Matondkar), the daughter of a rich NRI. Jagadish is in love with Pooja (Tara Sharma) who is from Bangalore; they meet at a college festival. When Jai clashes with Om’s values they drift apart.

Soon Jai receives a promotion in America and leaves with Neetu. Jagadish is caught computer hacking after trying to help a friend get the answers to a test. Om throws him out the house. Om, Ayesha and his mother have to leave the house after Om failed to pay the loan covering it. The three brothers are separated. Eventually, they all come together at the house auction to buy it back. Om is at the auction to see the winner and is surprised when Jagadish shows up to bid. He reveals that he used his hacking skills to create a program to block hackers instead. Jai comes at the end of the auction and bids more, which he got by selling his engine for the fastest car. He doesn’t have enough so the three brothers combine their money to win back the house, but it isn’t enough. Finally, it is revealed that the CEO of the company that Jagadish made the hacking program bid for the house and won. Jagadish made a deal that the price of the house is the price of the program. The three brothers reunite and move back into the house.