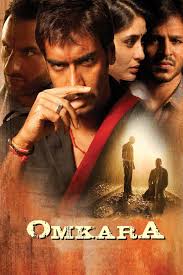 Langda dreams of becoming Omkara’s successor after the latter wins the election. But when Omkara appoints Kesu as his lieutenant, Langda feels betrayed and plots revenge.

Omkara is a 2006 Indian crime drama film adapted from William Shakespeare’s Othello, co-written and directed by Vishal Bhardwaj. It starred an ensemble cast of Ajay Devgn, Kareena Kapoor, Saif Ali Khan, Konkona Sen Sharma, Vivek Oberoi and Bipasha Basu in the lead roles, The director Vishal Bhardwaj himself composed the entire music for the film, including the background score, with lyrics by Gulzar. The film is set in Meerut, a city in Western Uttar Pradesh.

Omkara is the second film in Bhardwaj’s trilogy of Shakespeare adaptations, which began with 2003’s Maqbool and was completed with 2014’s Haider. The film was showcased in the Marché du Film section at the 2006 Cannes Film Festival along with a book on the making of Omkara. It was also selected to be screened at the Cairo International Film Festival, where Bhardwaj was awarded for Best Artistic Contribution in Cinema of a Director. The film also won 3 awards at the Kara Film Festival, an award at the Asian Festival of First Films, 3 National Film Awards, and 9 Filmfare Awards.

Omkara “Omi” Shukla is an enforcer for a gang that commits political crimes for the local politician Tiwari Bhaisaab. Ishwar “Langda” Tyagi and Keshav “Kesu Firangi” Upadhyay are his closest lieutenants. Langda gatecrashes a baraat and challenges Rajju, the groom, to try and stop Omkara from abducting the bride, Dolly Mishra. Rajju fails and the wedding never takes place.

Dolly’s father, advocate Raghunath Mishra, is enraged with Omkara and at one point threatens to kill him. To sort out the misunderstanding, Bhaisaab arranges for Dolly to appear before her father; she clarifies that she eloped with Omkara and was not abducted. Her father remains disgusted that she is in love with a man from a lower caste and leaves the village in shame.

Omkara eliminates a powerful electoral rival by exploiting an MMS sex scandal. Bhaisaab is elected for parliament and Omkara is promoted to the candidate for the upcoming state elections. Omkara appoints Kesu over Langda as his successor once he enters politics himself, as he feels Kesu, who hails from the upper classes and is college-educated, stands a better chance of winning over the younger, educated voting crowd than Langda, who is rustic and dropped out of school.

Langda, disappointed with Omkara’s poor judgment and jealous of Kesu, his younger, less-experienced superior, decides to take revenge. He first causes a violent brawl between Kesu and Rajju by taking advantage of Kesu’s low threshold for alcohol, which damages Omkara’s faith in Kesu. Langda has Kesu convince Dolly to mollify Omkara, but at the same time uses Kesu’s visits to Dolly as evidence to suggest to Omkara that the two of them are having an affair. Langda additionally has Indu, his wife and Omkara’s sister, steal an expensive piece of jewelry that Omkara gifted to Dolly, and encourages Kesu to gift it to his girlfriend Billo.

Billo is later used to lure Kichlu, a rival gang enforcer, out of hiding, so Omkara’s gang can assassinate him. Omkara arrives at the ambush and spots Billo wearing the missing jewelry; he murders Kichlu and his gang in a rage, and forces Langda to unambiguously tell him whether Kesu and Dolly are having an affair. Langda insists that they are, making a number of additional false claims to support his story.

Convinced of the affair, Omkara smothers Dolly to death on their wedding night. Elswhere, Langda attempts to have Kesu assassinated, but the bullet merely grazes his arm. Indu hears gunfire and rushes to Omkara’s aid, where she finds Dolly’s corpse and the recovered jewelry. She confesses to having stolen the jewelry for Langda, making Omkara realize that Langda is responsible for his fatal misunderstanding of the situation. Indu slashes Langda’s throat in retribution, while Omkara commits suicide and dies next to his wife.

Be the first to review “Omkara Dvd” Cancel reply