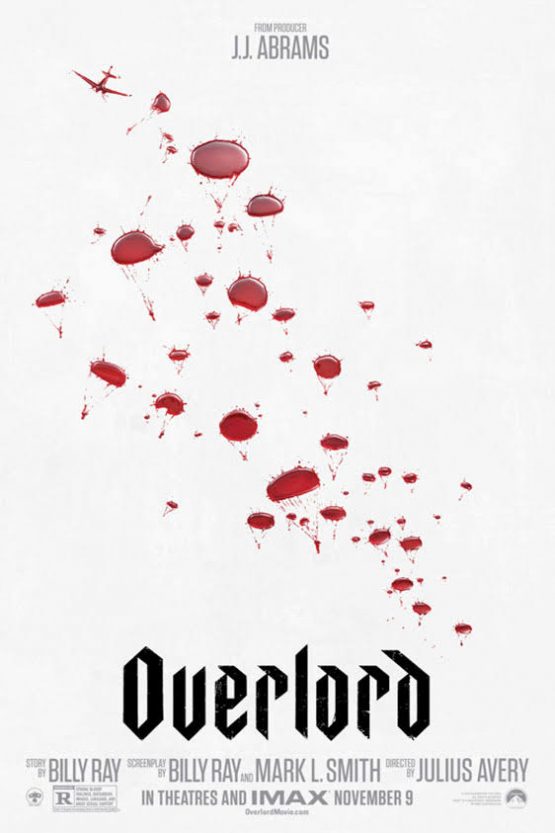 On the eve of D-Day, American paratroopers drop behind enemy lines to penetrate the walls of a fortified church and destroy a radio transmitter. As the soldiers approach their target, they soon begin to realize that there’s more going on in the Nazi-occupied village than a simple military operation. Making their way to an underground lab, the outnumbered men stumble upon a sinister experiment that forces them into a vicious battle against an army of the undead.

Overlord was released in the United States on November 9, 2018, by Paramount Pictures. The film received positive reviews from critics and grossed over $41 million worldwide on a budget of $38 million.

On the eve of D-Day in an alternate World War II, a paratrooper squad is sent to destroy a German radio tower in an old church. Their plane is shot down and crashes, and most of the squad, including squad leader Sgt. Rensin, are killed either in the crash or by Nazi soldiers and landmines. Four survivors remain: second in command Corporal Ford and Privates Boyce, Tibbet and Chase.

The team continues onward and meet Chloe, a young woman from the village where the church is located. She lets them take refuge in her house. Chloe lives with her 8-year-old brother Paul and her aunt, who has been disfigured by Nazi experiments taking place in the church. After Tibbet and Chase depart to check the scheduled rendezvous site, a Nazi patrol led by SS Hauptsturmführer Wafner visits Chloe. Wafner sends his men away and proceeds to coerce Chloe for sex, threatening to send her brother to the church to be “fixed”. Boyce, being an idealistic soldier and former paratrooper to 555th paratrooper unit “the triple nickels” cannot ignore this and interrupts the Nazi officer. Ford is forced to follow suit and restrain Wafner.

Attempting to reach the rendezvous point to look for Tibbet and Chase, Boyce witnesses the Nazis burning disfigured village residents. He is chased by a dog and is forced to hide in a truck carrying dead bodies inside the church. Sneaking out of the truck, Boyce discovers an underground base which houses not only a radio operating room, but also a laboratory where the Germans perform various experiments on the villagers involving a mysterious serum and a large pit filled with black tar. Boyce takes a syringe containing the serum and rescues Rosenfeld, another member of the paratrooper squad who was captured alive. They escape through the base’s sewers.

When Boyce and Rosenfeld get back to Chloe’s house, Tibbet and Chase have already returned. Wafner refuses to explain what the serum does, even as Ford tortures him. As the squad prepares to attack the church, Wafner attempts to escape and fatally shoots Chase. Boyce, having seen a dead man supposedly resurrected by the serum in the lab, injects Chase with the syringe. Chase is resurrected, but soon mutates and turns violent. A scuffle ensues ending with Boyce bludgeoning Chase to death. A patrol responding to the carnage arrives, and a shootout erupts where the patrol is killed and Ford blows half of Wafner’s face off. Wafner escapes with Paul as a hostage and back at the lab, injects himself with two dosages of the serum.

Boyce proposes infiltrating the base and destroying the tower from the inside which would also destroy the laboratory. The other privates support him and Ford grudgingly agrees. Splitting up, Rosenfeld and Tibbet launch a frontal assault as a distraction, while Ford, Boyce and Chloe enter the base using the sewers. Boyce and Ford plant the explosives while Chloe looks for Paul. Chloe finds Paul, sends him back to the village and successfully kills a mutated test subject who corners her. She returns to the village where Tibbet and Rosenfeld are pursued by the base’s defenders. Tibbet is wounded while shielding Paul from gunfire while Chloe kills the remaining Germans and treats Tibbet’s wounds.

Wafner, now mutated and possessing superhuman strength and resilience, overpowers Ford and impales him on a meat hook. Wafner reveals that the serum was made by using the villagers’ bodies to distill the ancient power of the black tar, which had been running under the village for centuries. The aim was to create immortal and invincible soldiers to serve the Reich. As Boyce distracts Wafner, Ford pulls the hook out and injects himself with the serum to heal his wounds. He holds off Wafner long enough for Boyce to set off an oxygen tank, which sends Wafner falling into the tar pit. As he begins to mutate, Ford orders Boyce to leave him behind and detonate the explosives, believing neither side should possess the serum. Boyce complies and narrowly escapes as the church and radio tower collapse behind him, killing Ford, Wafner and the test subjects. He joins the others as a radio announces that the D-Day invasion concluded in a victory for the Allies.

In his report Boyce credits Ford for the decision to plant the bombs inside the church. The commanding officer questions Boyce regarding rumors of an underground lab under the church. Boyce, sharing Ford’s view, denies seeing anything worth digging up. The officer seemingly accepts his story and informs him that they will be reassigned to Charlie Company as the war continues.

Be the first to review “Overlord Dvd” Cancel reply