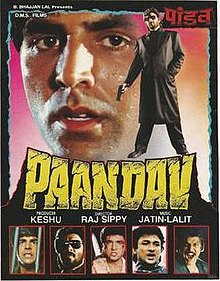 Inspector Vijay arrests a powerful man with connections within the police department. Vijay discovers that the mole within the department who is helping the man is none other than his own brother.

Inspector Vijay lives with his elder brother, Assistant Commissioner of Police, Ashwini Kumar; and sister-in-law, Jyoti, in an upper middle-class community in India. Assigned an investigation, which leads Vijay to conclude that the crime was committed by K.K. Kelva’s man, he risks his life to arrest him, and hold him in prison until such time a date is fixed for a court hearing. Vijay also interrogates his prisoner, often using excessive force. Shortly thereafter, Vijay is instructed to release the prisoner – and the person who instructs him thus is no other than his very own brother, Ashwini, who it seems on the pay-roll of Kelva and his gangsters. What can Vijay possibly do to bring an end to this illicit relationship?

Be the first to review “Paandav Dvd” Cancel reply