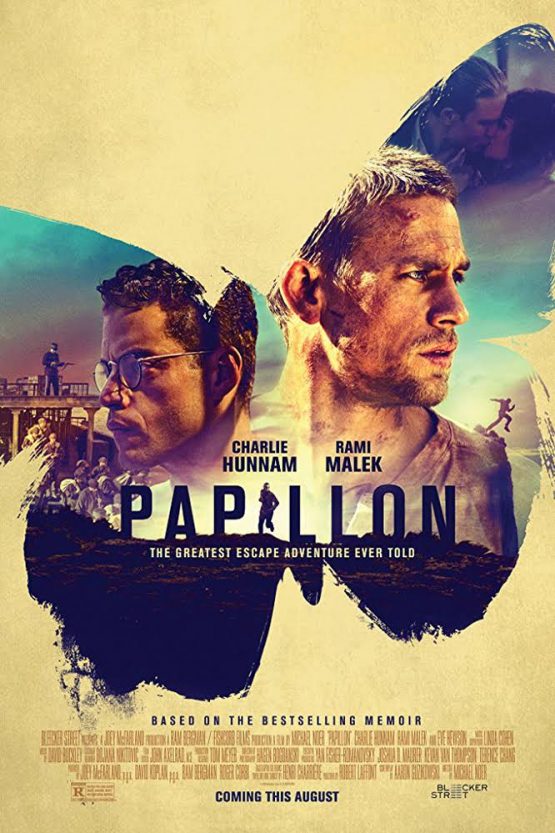 The epic story of Henri “Papillon” Charrière, a safecracker from the Parisian underworld who is framed for murder and condemned to life in the notorious penal colony on Devil’s Island. Determined to regain his freedom, Papillon forms an unlikely alliance with convicted counterfeiter Louis Dega, who in exchange for protection, agrees to finance Papillon’s escape.

Papillon is a 2017 biographical drama film directed by Michael Noer. It tells the story of French convict Henri Charrière (Charlie Hunnam), nicknamed Papillon (“butterfly”), who was imprisoned in 1933 in the notorious Devil’s Island penal colony and escaped in 1941 with the help of another convict, counterfeiter Louis Dega (Rami Malek). The film’s screenplay is based on Charrière’s autobiographies Papillon and Banco, as well as the former’s 1973 film adaptation, which was written by Dalton Trumbo and Lorenzo Semple Jr. and starred Steve McQueen and Dustin Hoffman.

Papillon premiered on September 9, 2017, in the Special Presentations section at the 2017 Toronto International Film Festival.

Henri “Papillon” Charrière, a safecracker from the Parisian underworld, is framed for murder. Though he has an alibi from his lover, Nenette, Papillon is convicted and condemned to the notorious penal colony in French Guiana — a hellish prison from which nobody has escaped.

On the ship to South America, Papillon meets a quirky counterfeiter named Louis Dega. That evening Dega is awakened as two convicts murder a prisoner sleeping next to him in order to cut open his stomach and steal the money he had swallowed. Papillon forms an unlikely alliance with Dega, who is targeted by the other prisoners who suspect him of also hiding money. Papillon saves Dega’s life and is punished for fighting by the guards. In exchange for Papillon’s protection, Dega agrees to finance Papillon’s escape, ultimately resulting in a bond of lasting friendship.

While Papillon and Dega are ordered to carry away a guillotined body, a guard starts to whip Dega. Papillon strikes the guard with a rock and runs into the jungle for his first escape. He is given two years of silent solitary confinement. After the warden learns he has been receiving extra food, his rations are cut in half until he gives up the name of his supplier. Papillon did not betray Dega.

The second escape plan is made from the prison infirmary. Papillon is feigning insanity from his confinement. Dega is an aide to the warden and still has money to fund the escape. Celier has a connection to get a boat. The sexually abused Maturette is the fourth to join the dangerous venture. Dega drugs the guards using pills meant to sedate a supposedly insane Papillon and the three others escape over the walls, with Dega injuring his leg in the process, to the jungle and to a boat Dega paid for. As a storm approaches, it is clear they will not all survive in the small leaky boat. Celier wants to kill the injured Dega but in the battle it is Celier who dies. Next the three survivors find themselves being cared for in a Colombian convent. Their apparent freedom is short lived because the Mother Superior turns them in. Maturette is killed and Papillon gets five years in solitary confinement.

Papillon is released as a weathered older man on Devil’s Island with high cliffs. He finds Dega who has adjusted to prison life and has no interest in escape. A fall from the cliffs is certain death. Papillon bags coconuts together for a raft and in a swell of waves he survives the fall. The third escape is a success and he is a free man. He writes a memoir.

The movie postscript reads: “Over 80,000 prisoners were condemned to the penal colony in French Guiana, most of whom never returned to France. Henri Charriere’s autobiography ‘Papillon’ became the number one bestseller for 21 weeks in France. To date, it has sold over 13 million copies in 30 languages. In 1970, the French Minister of Justice signed a decree allowing Charriere to return to France. For the remainder of his life, he lived a free man. The penal colony in French Guiana did not survive him”.

Be the first to review “Papillon Dvd” Cancel reply