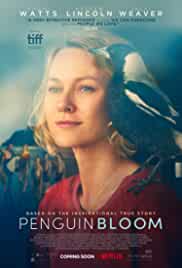 A family takes in an injured Magpie that makes a profound difference in their lives.

Penguin Bloom is a 2020 drama film directed by Glendyn Ivin, from a screenplay by Shaun Grant and Harry Cripps, and is based on the book of the same name by Cameron Bloom and Bradley Trevor Greive. It stars Naomi Watts, Andrew Lincoln and Jacki Weaver. The book and film are based on a true story of Sam and Cameron Bloom’s family and their interactions with a magpie named ‘Penguin’

During a family vacation in Thailand, Sam Bloom (Naomi Watts) accidentally falls off a high balcony and breaks her T6 thoracic vertebrae resulting in partial paralysis. Back home in Australia, Sam, an avid surfer, struggles to adjust to life in a wheelchair, but is supported by her husband Cameron (Andrew Lincoln), their three sons Noah, Rueben and Oli, and Sam’s overbearing mother Jan (Jacki Weaver).

One afternoon, the three boys find and bring home an injured magpie chick who they name Penguin. Sam is initially despondent to care for Penguin but understands it is important to Noah, and as time goes on, she bonds with her. Noah feels guilty for being the one who asked his mum to go up to the balcony in Thailand and has withdrawn from her since the accident. Sam and Cameron’s relationship also deteriorates as she struggles to find joy in daily life and wishes to forget who she was before the fall since she can no longer live in the same way. She demands he never asks her how she is.

After several weeks, Penguin fully recovers and learns to fly, inspiring Sam to want to do something for herself; she starts kayaking lessons. For Sam’s birthday, the Blooms go for dinner at Jan’s house, joined by Sam’s sister Kylie (Leeanna Walsman) and Sam’s kayaking instructor Gaye (Rachel House). While Jan and Cameron argue about Sam’s new life and their responsibilities to her, Penguin is attacked by two larger birds and then flies away.

Sam eventually confronts Noah about his guilt and tells him he is not to blame for what happened to her. She apologises for being distant and reveals she has found her strength, and the whole family reconcile. Sam asks Cameron to ask her how she is, and when he does, she replies, “I’m better.”

Penguin returns home a few days later, and Sam thanks her for helping her recover.

Be the first to review “Penguin Bloom Dvd” Cancel reply