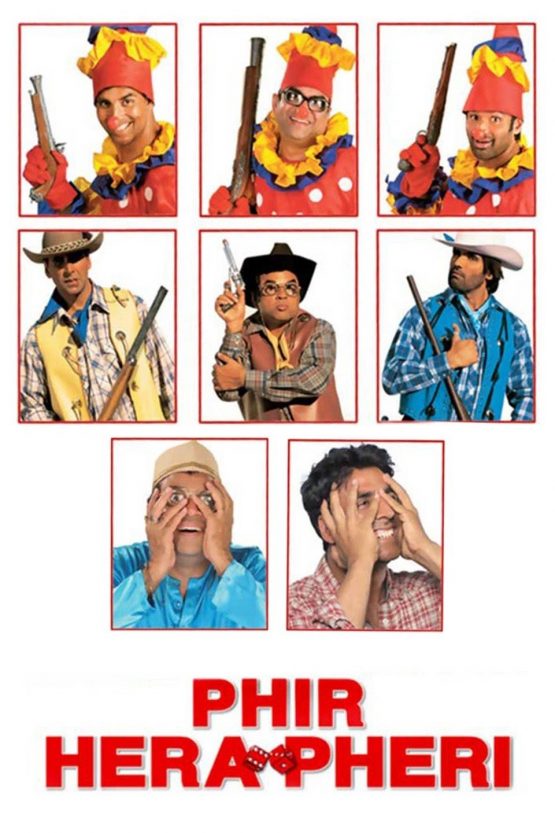 The lives of Raju, Shyam and Baburao change completely when they get cheated by a fraudster. Now, they must find another way to repay the loan they took from a dreaded gangster.

Phir Hera Pheri (transl. Monkey Business Again) is a 2006 Indian Hindi-language comedy film and a sequel to the 2000 film Hera Pheri. It is the second installment of Hera Pheri film series. The film stars the three men from the previous film Akshay Kumar, Sunil Shetty and Paresh Rawal. Bipasha Basu and Rimi Sen are the new additions in the film. The central plot takes inspiration from Lock, Stock and Two Smoking Barrels. The movie was released on 9 June 2006.

The film received praise for its humor, performances, and sense of fun. It has since been hailed as a cult classic comedy film particularly by the audience. The film became a box office blockbuster, grossing around 69 crores on a budget of 18 crores.

The film opens with a prologue bringing the audience up to date, stating that each has suffered a personal loss despite their new riches. Shyam lost his love, Anuradha (Tabu), in an automobile accident, Raju’s mother died after battling a disease, and Baburao – having nothing to lose in the first place – lost the little traces of common sense that he did possess.

The three men are living a lavish life in a massive bungalow and splurging on various luxuries. Raju hears about an idea for doubling his wealth in 21 days from a con woman, Anuradha (Bipasha Basu), who is claiming to be a bank manager, and she convinces Shyam and Baburao to go along with it. Raju first arranges for ₹30 lakh from Shyam and Baburao and then a further ₹50 lakh by selling their bungalow. He convinces a small-time goon, Pappu (Rajpal Yadav) to contribute the remaining balance of ₹20 lakh so that he can come up with the minimum deposit of ₹ one crore, which Anuradha has promised to double.

The trio invests the money and three weeks later realise that it was all a scam and that they are now penniless. To make matters worse, they do not even have possession of their bungalow, which Raju had sold off to arrange the last bit of money needed, and have to live in a chawl (tenement). Pappu shows up to the bungalow the next day to pick up his portion of the money but is shocked to learn that Raju has left and the bungalow is now in possession of a Parsi gun collector (Dinesh Hingoo). Pappu is now in trouble because he had borrowed money from a lisping but dreaded gangster, Tiwari (Sharat Saxena), who will kill him if he doesn’t pay up. He comes across Raju one day, and upon hearing of the scam pretends to be sympathetic. He tricks him and brings the three to his boss, telling him that they are the ones who took the money. Tiwari threatens them and tells them they have to come up with the money or else they will die. As they are being taken home by some of Tiwari’s goons, the three manage to escape. Raju, Shyam and Baburao are about to leave the city when Raju remembers that he owes money to a woman named Anjali (Rimi Sen). The three head over to her house and are surprised to find that she is Pappu’s sister. Tiwari’s goons show up and kidnap Anjali because Pappu has not returned the money. Feeling guilty that he is the one who got Anjali in trouble, Raju decides that he will go to Tiwari and try to get her freed. Shyam and Baburao refuse to leave without them and decide to stay as well. The three go back to Tiwari to ask him to release Anjali, and Tiwari tells them to bring the money, releasing Anjali.

Raju, Shyam and Baburao now have three days to come up with ₹40 lakh to pay back the goon or else they will themselves be killed. Raju overhears the neighbour, Munnabhai (Johnny Lever), plotting to steal drugs from another gangster, Nanji Bhai (Milind Gunaji), and wrongly assumes they are talking about stealing money. Raju hatches a plan for the three of them to steal from Munnabhai. The three manage to succeed barely but are confused when they do not find money inside. Raju recognises the stuff like drugs and tells them that they are worth at least ₹ three crores (thirty million). They think that if they can sell them to Kachara Seth (Manoj Joshi) and pay off Tiwari, they can also become rich, but their neighbour once again steals the drugs from them. They then run into Anuradha, and she tells them that the entire scam was hatched by Kabeera (the gangster from the first Hera Pheri) and his close aide Chota Chetan (Razak Khan) to get revenge on the trio and that the only reason she went along with it was because they were holding her niece hostage (Anuradha’s sister was Kabeera’s gang member and part of the first movie’s kidnapping plot). Their money was converted to diamonds to pay the ransom, but she fled with them once she discovered her niece had escaped and hid them under a decoration of a circus float.

In the end, all the guys end up in a circus show where they attempt to get hold of the diamonds. These are strewn all over the ground in public by a gorilla. Soon the cops reach the spot, and they arrest Tiwari, Nanji Bhai as well as Chota Chetan. Raju, Shyam and Baburao flee along with Anjali, Anuradha and her niece. Raju escapes with Pappu’s cellphone and three antique guns with him, which are worth ₹5–6 crore, though he does not know about it. Pappu informs Shyam and Baburao about the guns, after which they try to call Raju on his cellphone. The film ends in a cliffhanger where Raju is about to throw the weapons in the river with his cellphone ringing in his mouth.