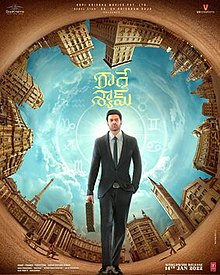 A romantic drama set in Europe during the 1970s.

Radhe Shyam is an upcoming Indian period sci-fi romantic drama film written and directed by Radha Krishna Kumar, starring Prabhas and Pooja Hegde. The film is shot simultaneously in Telugu and Hindi languages. The film is produced by UV Creations, Gopi Krishna Movies and T-Series. Set in Europe of the 1970s, the film’s music is scored by Justin Prabhakaran with cinematography by Manoj Paramahamsa and editing by Kotagiri Venkateswara Rao.

Principal photography of the film commenced on 6 October 2018 with filming taking place in Hyderabad, Italy and Georgia. Originally planned for a release on 30 July 2021, it was postponed due to the COVID-19 pandemic. The film is now scheduled to release on 14 January 2022, coinciding with the festival of Sankranthi.

Be the first to review “Radhe Shyam DVD” Cancel reply