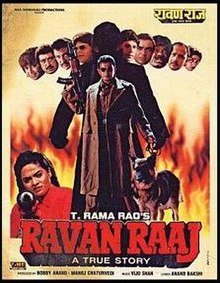 Former ACP Arjun Verma is reinstated to investigate the abductions of a few women in the city. To his horror, he discovers the skeletal remains of the abducted women.

Ravan Raaj: A True Story is a 1995 Indian Hindi-language film directed by T.Rama Rao, starring Mithun Chakraborty, Madhoo and Aditya Pancholi and Harish Kumar. The film is centred on kidney smugglers and a serial killer. The film is a remake of the Tamil blockbuster Pulan Visaranai, starring Vijayakanth. It was a “Hit” film at the box office.

Crime and corruption have taken over Bombay City without any solution. A rash of kidnappings of young women takes place. One auto-rickshaw driver “Auto Kesariya” (Shakti Kapoor) is behind this crime. The policemen of Kala Chowki Police Station are doing little to stop these crimes. Former Assistant Commissioner of Police Arjun Verma (Mithun Chakraborty) is reinstated and assigned to this case. Arjun gets himself deeply involved in this disappearance and the kidnappings and faces the shock and trauma of finding skeletal remains of young women who have been abducted as well as body parts stolen from innocent patients from hospitals. His personal life also turns upside down as his fiancée abandons him on his wedding day, while his niece is abducted and held for ransom, and above all Arjun Verma himself becomes the target of assassins hired by influential politicians and senior police officials.

Be the first to review “Ravan Raaj: A True Story Dvd” Cancel reply