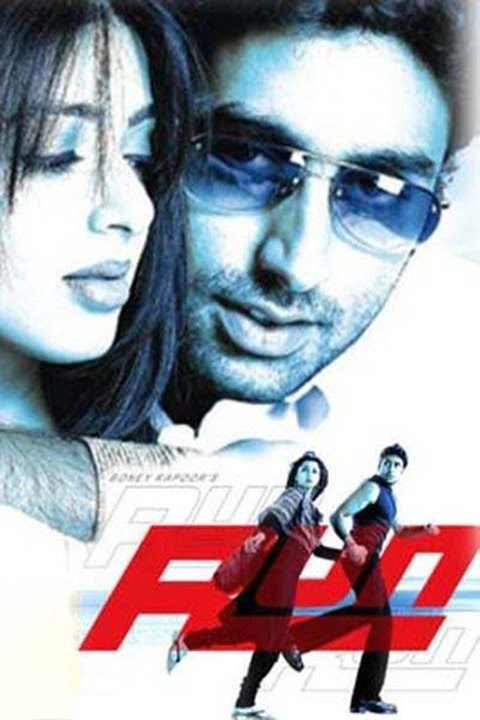 Jhanvi and Siddharth are head over heels in love with each other. But Ganpat, her brother who is a gangster, disapproves of their relationship and plots to kill Siddharth.

Run is a 2004 Indian action comedy-romance film. It stars Abhishek Bachchan and Bhumika Chawla in the lead roles. It is directed by Jeeva and is a remake of the 2002 Tamil movie Run starring Madhavan and Meera Jasmine. The film was produced by Boney Kapoor and Sridevi. Most of the film was shot at Marwah Studios in Noida. The film received mixed reviews but was a profitable venture.

Siddharth (Abhishek Bachchan) comes to New Delhi to further his study and stays with his sister (Ayesha Jhulka) from Allahabad. His spoiled friend Ganesh (Vijay Raaz) trails behind him and arrives later. Siddharth through perceived destiny and chance runs into Jhanavi (Bhumika Chawla). Siddharth falls in love with Jhanavi who belongs to a conservative Haryanvi family. Jhanavi’s elder brother Ganpat (Mahesh Manjrekar) is a head of the family who is very protective of his family, mainly his sister after the loss of their parents.

Initially Jhanvi brushes off Siddharth’s constant attempts to be with her in order to keep him safe from Ganpat. An encounter with the thugs and Siddharth leads Jhanvi to encourage Siddharth to run but he instead rises to the challenge and fights off all the thugs. While Ganpat goes to threaten Esha and her husband, Siddharth threatens him back viciously as he was one step ahead of him and planned to retaliate (though falsely) by killing Ganpat’s family excluding Jhanvi.

Siddharth and Jhanavi keep meeting with each other, hiding and running from Jhanavi’s brother and his men, while Siddharth fights off any thugs that follow him and threaten to hurt him or his family. Eventually Ganpat decides to use his thugs to beat up a boy who was giving Siddharth a hard time in school, thus giving the impression to the principal of the school that Siddharth is a thug. Siddharth is suspended in return. Then they hit Esha with a van and frame her husband for him to lose his job all at the same time, while Siddharth and Jhanvi agree they should elope and get married before she gets married off.

Meanwhile Ganesh constantly gets himself conned and goes through various harsh realities about life. In the end Ganesh loses all his money, his watch, his clothes, his hope to meet his friend Siddharth, and a kidney. All his experiences end in the form of making Ganesh accidentally a “Pettycoat Baba”, a saint who is believed by the people (not by Ganesh) to be living in the Himalayas for 250 years.

In the climax, Siddharth hatches a plan to bait Ganpat and his men to the wrong area and marry Jhanvi with her remaining family members who care for her and Siddharth, until Ganpat gets wind of this and tracks them down. The newlyweds now have to run from a mass amount of thugs. This leads to a final battle which ends with a one on one fight with Siddharth and Ganpat. Siddharth wins and refuses to deal the death blow, allowing him to live. Ganpat allows Jhanvi and Siddharth to leave, finally accepting Siddharth as his brother in-law. Siddharth and Jhanvi leave married.

Be the first to review “Run Dvd” Cancel reply