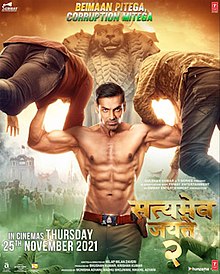 Satyameva Jayate 2 revolves around the fight against injustice and misuse of power. From police and politicians to industrialists and a common man, the film will explore corruption in all spheres.

Satyameva Jayate 2 is an upcoming Indian Hindi-language vigilante action film written and directed by Milap Zaveri with production by T-Series and Emmay Entertainment. Based on the fight against injustice and misuse of power, it is an official spiritual sequel of the 2018 film Satyameva Jayate and stars John Abraham in a quadruple role alongside Divya Khosla Kumar, Rajeev Pillai and Anup Soni in important characters. As of April 2021, the release date of film has been postponed due to rise in COVID-19 cases. The film is now scheduled for release on 25 November 2021.

Be the first to review “Satyameva Jayate 2 DVD” Cancel reply