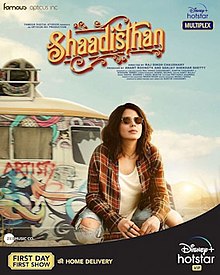 Mumbai to Ajmer, a squabbling family, a band, and clashing values. Along the roads of friendship and life, this journey only gets crazier

Shaadisthan is a 2021 Indian Hindi-language drama musical film directed by Raj Singh Chaudhary starring Kirti Kulhari. The film is produced under the production company Famous Digital Studio and distributed by Disney+ Hotstar Multiplex. The story is based on women’s empowerment.

Plot
Arshi & her parents are bound to travel from Mumbai to Ajmer for her cousin Cholu’s wedding but they miss their flight. Arshi who was unwilling to travel to the wedding had earlier gone into hiding at her friend’s place & returned only after her mother pleads on phone. Cholu tells Arshi’s father Papaji that his friend’s music troupe is travelling in their bus to Ajmer to perform at his wedding & he has arranged their travel with them. The next day Arshi & her parents reach the scheduled place & start their journey. Her father disapproves of the troupes’ habits like using expletives, drinking & smoking early in the morning & so forth however he has no choice apart from expressing it to his wife. Sasha is the lead singer of the troupe, Imad, Jigme are other members & courteous towards the family. Sasha is a modern girl who calls spade a spade & hits back at Papaji when he casually remarks their music is noise. Arshi is in a sombre mood & has not eaten anything since yesterday & does not speak a word when the troupe members try to interact with her. This further angers Papaji however her mother tries to calm down his nerves. Slowly the ice between Arshi’s parents & the troupe breaks & they start interacting freely.

Somewhere in the afternoon, they halt in the middle of the highway to take a break. As the troupe members are outside & the family is inside the bus, Papaji scolds Arshi for her stone-cold attitude. Arshi cannot take it anymore & runs out in the open & cries her heart out. The troupe members try to console her, she tells them that she would turn 18 the next day & would get engaged at the wedding ceremony of Cholu. The troupe members are shocked but realise that they are helpless. Arshi tells them that she had ran away to her friend’s place but could not see her mother crying & pleading so she returned. Her mother on the other hand although cares for Arshi, has silently submitted herself to the archaic societal practices. Her parents are under the pressure of being outcasted from their extended family & friends if they don’t follow traditional rites. Arshi tells them that on one side she cannot see her mother crying & pleading to her & on the other end she cannot imagine her future with an unknown person at such tender age.

In the evening when they enter Udaipur city Papaji gets down for personal work & the rest of them take a detour to the hotel of Tiger, a common friend & plan to rest for an hour or so. Tiger is a gracious host & strikes chords with Arshi’s mother who was initially reluctant to get out of the bus. All of them have a good time at the hotel with some dance & music. Later we see the troupe in deep slumber at a Dhaba. The owner of the Dhaba answers the call on Arshi’s mother’s phone & wakes her up. Cholu who had called her tells her that Papaji is trying to connect them for a long time & tells her to send him their location immediately. She runs towards the bus & finds everyone in deep sleep. She wakes up Arshi & she sends Papaji the location of the place. Jigme later realises that Tiger had laced their tea with Opium, which everyone seem to have enjoyed. Arshi’s mother & Sasha start cooking dinner because the Dhaba has ran out of food. While cooking, Sasha confronts her with very pointed & intimate questions & for most of them, she has a negative answer. Finally, she acknowledges that she has followed societal norms dedicated towards family & in this process completely forgotten about her intimate & personal feelings. Sasha tells her that being a free-spirited girl, she admires her sacrifices for the family but indirectly questions if she would want the same fate for Arshi.

After an eventful journey the next day they reach the wedding venue & settle in their respective rooms. Later on the wedding eve, Papaji faces humiliation from his sister & brother-in-law because he got just half a million rupees for the wedding, while they were expecting at least 2-3 times bigger amount. They remind him that because of their efforts they are able to marry their daughter in a reputed family. He is deeply hurt by this humiliation & forced to rethink his understanding of the societal structure & his daughter’s future. Arshi tells the troupe that she wants to spend the night with them. Sasha conveys this to her mother & they continue their discussion from the previous night. She does acknowledge the merit in her argument & at the same time expresses like music notes, everyone has a different approach to life. Later in the night, Arshi’s parents have an intimate conversation after a long time & Arshi’s mother tells Papaji that from the bottom of her heart she truly does not care about the societal norms, which also strikes a chord with him.

The next day we see the entire family happily boarding the music troupe’s bus back to Mumbai.

Be the first to review “Shaadisthan dvd” Cancel reply