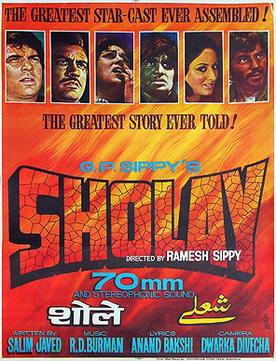 Jai and Veeru, two ex-convicts, are hired by Thakur Baldev Singh, a retired policeman, to help him nab Gabbar Singh, a notorious dacoit, who has spread havoc in the village of Ramgarh.

Sholay (Hindustani:  (About this soundlisten), transl. Embers) is a 1975 Indian action-adventure film written by Salim–Javed, directed by Ramesh Sippy, and produced by his father G. P. Sippy. The film is about two criminals, Veeru and Jai (played by Dharmendra and Amitabh Bachchan respectively), hired by a retired police officer (Sanjeev Kumar) to capture the ruthless dacoit Gabbar Singh (Amjad Khan). Hema Malini and Jaya Bhaduri also star, as Veeru and Jai’s love interests, Basanti and Radha, respectively. Sholay is considered a classic and one of the best Indian films. It was ranked first in the British Film Institute’s 2002 poll of “Top 10 Indian Films” of all time. In 2005, the judges of the 50th Filmfare Awards named it the Best Film of 50 Years.

The film was shot in the rocky terrain of Ramanagara, in the southern state of Karnataka, over a span of two and a half years. After the Central Board of Film Certification mandated the removal of several violent scenes, Sholay was released with a length of 198 minutes. In 1990, the original director’s cut of 204 minutes became available on home media. When first released, Sholay received negative critical reviews and a tepid commercial response, but favourable word-of-mouth publicity helped it to become a box office success. It broke records for continuous showings in many theatres across India, and ran for more than five years at Mumbai’s Minerva theatre. The film was also an overseas success in the Soviet Union. It was the highest-grossing Indian film ever at the time, and was the highest-grossing film in India up until Hum Aapke Hain Koun..! (1994). By some accounts, Sholay remains the highest-grossing Indian film of all time, adjusted for inflation.

The film is a Dacoit Western (sometimes called a “Curry Western”), combining the conventions of Indian dacoit films with that of Spaghetti Westerns along with elements of Samurai cinema. Sholay is also a defining example of the masala film, which mixes several genres in one work. Scholars have noted several themes in the film, such as glorification of violence, conformation to feudal ethos, debate between social order and mobilised usurpers, homosocial bonding, and the film’s role as a national allegory. The combined sales of the original soundtrack, scored by R. D. Burman, and the dialogues (released separately), set new sales records. The film’s dialogues and certain characters became extremely popular, contributing to numerous cultural memes and becoming part of India’s daily vernacular. In January 2014, Sholay was re-released to theatres in the 3D format.

In the small village of Ramgarh, the retired policeman Thakur Baldev Singh summons a pair of small-time thieves that he had once arrested. Thakur feels that the duo – Veeru and Jai – would be ideal to help him capture Gabbar Singh, a dacoit wanted by the authorities for a ₹50,000[b] reward. Thakur tells them to surrender Gabbar to him, alive, for an additional ₹20,000 reward.

The two thieves thwart the dacoits sent by Gabbar to extort the villagers. Soon afterwards, Gabbar and his goons attack Ramgarh during the festival of Holi. In a tough battle, Veeru and Jai are cornered. Though Thakur has a gun within his reach, he does not help them. Veeru and Jai fight back and the bandits flee. The two are, however, upset at Thakur’s inaction, and consider leaving the village. Thakur explains that Gabbar had killed nearly all of his family members, and had both his arms cut off a few years earlier, which is why he could not use the gun. He had concealed the dismemberment by always wearing a shawl.

Living in Ramgarh, the jovial Veeru and cynical Jai find themselves growing fond of the villagers. Veeru is attracted to Basanti, a feisty, talkative young woman who makes her living by driving a horse-cart. Jai is drawn to Radha, Thakur’s reclusive, widowed daughter-in-law, who subtly returns his affections.

Skirmishes between Gabbar’s gang and Jai-Veeru finally result in the capture of Veeru and Basanti by the dacoits. Jai attacks the gang, and the three are able to flee Gabbar’s hideout with dacoits in pursuit. Fighting from behind a rock, Jai and Veeru nearly run out of ammunition. Veeru, unaware that Jai was wounded in the gunfight, is forced to leave for more ammunition and also to drop Basanti at a safe place. Meanwhile, Jai, who is continuing the gunfight singlehandedly, decides to sacrifice himself by using his last bullet to ignite dynamite sticks on a bridge from close range.

Veeru returns, and Jai dies in his arms. Enraged, Veeru attacks Gabbar’s den and catches the dacoit. Veeru nearly beats Gabbar to death when Thakur appears and reminds Veeru of the promise to hand over Gabbar alive. Thakur uses his spike-soled shoes to severely injure Gabbar and destroy his hands. The police then arrive and arrest Gabbar. After Jai’s funeral, Veeru leaves Ramgarh and finds Basanti waiting for him on the train. Radha is left alone again.

Dharmendra as Veeru
Sanjeev Kumar as Thakur Baldev Singh
Hema Malini as Basanti
Amitabh Bachchan as Jai (Jaidev)
Jaya Bhaduri as Radha, Thakur’s daughter-in-law
Amjad Khan as Gabbar Singh
Satyen Kappu as Ramlaal, Thakur’s servant
A. K. Hangal as Rahim Chacha, the imam in the village
Sachin as Ahmed, son of the imam
Jagdeep as Soorma Bhopali, a comical wood trader
Leela Mishra as Mausi, Basanti’s maternal aunt
Asrani as the Jailor, a comical character modelled after Charlie Chaplin in The Great Dictator
Keshto Mukherjee as Hariram, prison barber and Jailor’s side-kick
Mac Mohan as Sambha, Gabbar Singh’s sidekick
Viju Khote as Kaalia, another of Gabbar’s men whom he kills in a game of Russian roulette
Iftekhar as Inspector Khurana, Radha’s Father
Helen in a special appearance in song “Mehbooba Mehbooba”
Jalal Agha in a special appearance in song “Mehbooba Mehbooba”
Raj Kishore as a jail inmate with gayish mannerisms

Be the first to review “Sholay Dvd” Cancel reply