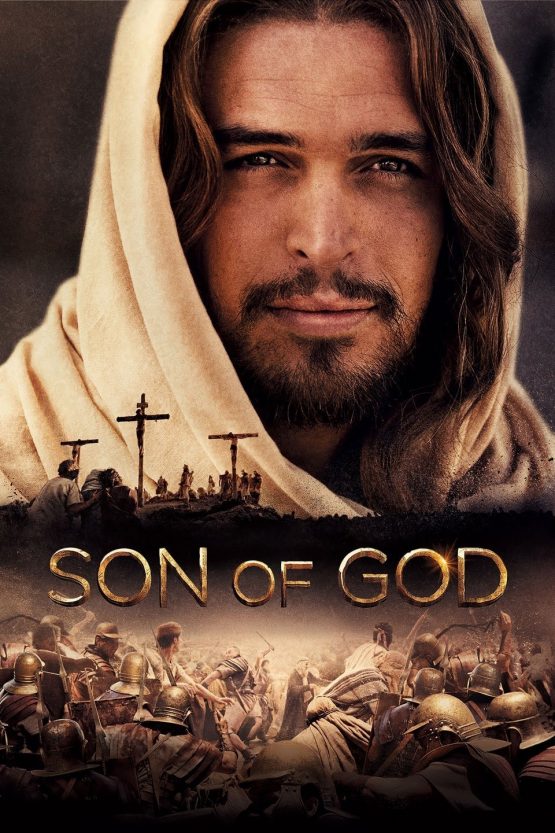 After leaving his hometown, Jesus Christ accumulates a huge amount of followers through his teachings and miracles. Fearing his sudden growth, his enemies plot to annihilate him.

Son of God is a 2014 American epic biblical film directed by Christopher Spencer, and produced by Mark Burnett and Roma Downey. The film retells the life of Jesus and is an adaptation of the ten-hour miniseries The Bible, which aired in March 2013 on the History channel, and immediately following the movie begins another TV series called A.D. The Bible Continues.

John, the last surviving follower of Jesus Christ, lives in exile as a hermit near the seaside where he tells his story of his time with Jesus. In Bethlehem, Jesus is born to a virgin named Mary and her husband Joseph. Three wise men visit Jesus declare him the future King.

Through his teachings and numerous miracles, Jesus builds a huge following, who begin to call him the Messiah. He also draws the attention of the Pharisees, Jewish religious leaders. The Pharisees claim Jesus is blaspheming God by forgiving sins, something only God can do. Jesus responds by saying he is the son of God.

Jesus tells the disciples they are to travel to Jerusalem for the upcoming Passover holiday. He enters the city on the back of a donkey and is met by a huge crowd of supporters, who lay palm leaves in his path. Caiaphas, the head of the Pharisees, is afraid that Jesus’ presence in the city will further agitate his people, who are already in a near state of revolt against the oppressive Romans, led by Pontius Pilate. It is revealed that, earlier, Pilate had warned Caiaphas that if there were any trouble from the Jews, he would close the temple, thus cancelling Passover.

Upon entering the temple, Jesus sees a group of money changers and proceeds to upend their tables. This act draws cheers from the people and scorn from the Pharisees. Later, Jesus tells a little girl that every stone of the temple will soon fall. The Pharisees take this as a plan to destroy the temple and decide Jesus must be stopped. Judas, one of Jesus’ disciples, approaches the Pharisees. He believes Jesus is going too far and wants to help. The Pharisees give him 30 pieces of silver for his assistance.

The night before Passover, Jesus tells the disciples this will be their Last Supper together and says that one of them will betray him. Later, in the Garden of Gethsemane, Judas kisses Jesus’ cheek, thereby identifying Jesus to the Pharisees and revealing Judas’ betrayal. Jesus is arrested for blasphemy while the disciples flee the garden to save themselves.

Out of fear of the temple’s closure due to an open trial during Passover, Caiaphas orders an immediate trial during the late hours of night in privacy, which are violations of Jewish law, against the order of other priests. Caiaphas asks Jesus if he is the son of God, and he answers “I am”. This is all the Pharisees need to hear, and they immediately find Jesus guilty of blasphemy.

That morning, to a growing crowd, Caiaphas announces Jesus’ guilt and reveals the penalty for blasphemy is death. Judas, horrified by what he has done, throws the silver at the Pharisees and runs off; he later hangs himself. Caiaphas believes if the Pharisees killed Jesus on Passover, it would start a riot, so he turns him over to the Romans for the punishment.

Pilate tells Caiaphas that Jesus didn’t break any Roman laws, but orders him to be lashed 40 times. Since it’s Passover, Pilate says he will follow tradition and free a prisoner of the people’s choosing, and if they choose Jesus, he will be set free. By this time, Mary (Roma Downey) has arrived in Jerusalem to see what is happening to her son.

Pilate orders the crowd to enter his courtyard to choose whether to release Jesus or Barabbas, a convicted murderer. Since none of Jesus’ followers are allowed into the courtyard, Caiaphas easily sways the vote so that Barabbas is set free. Pilate then asks what he should do with Jesus, and again Caiaphas sways the crowd to have him executed by way of crucifixion.

Fearing a riot among the hostile people, Pilate orders the crucifixion, then literally washes his hands of the situation. A battered and bloodied Jesus then carries a cross to Golgotha and is nailed to it by the mocking Roman guards, who earlier had placed a crown of thorns on his head. Before the cross is put into place, Pilate orders a sign attached to it, reading: “The King of the Jews”, much to Caiaphas’ dismay.

With John, Mary and Magdalene watching in horror, Jesus hangs from the cross for several agonizing hours. After forgiving the Romans and the Pharisees who condemned him to death, he asks why God has forsaken him, and declares “It is finished”. Accomplished, Jesus dies as the temple and earth are shaken by an earthquake. While the lamps are knocked down, the curtains in the temple where God’s spirit was supposed to be present, tear apart. He is then lowered from the cross and placed into a tomb, which is sealed off with a large rock.

Three days later, Magdalene goes to visit the tomb but is shocked to see the rock broken into pieces and the tomb empty. Magdalene soon sees a man by the tomb’s entrance and realizes he is Jesus, who has been resurrected. Magdalene goes to the disciples’ hiding place and tells them the good news, but they don’t believe her at first. Jesus then appears to them, and they all now believe, except “Doubting” Thomas. Once Thomas touches Jesus, then he believes.

Forty days later, Jesus is speaking to his disciples where he tells them to travel the world and spread his message. He then ascends into Heaven, and the disciples go their separate ways.

After finishing his story, an elderly John says that all of the disciples were eventually killed for their beliefs, except him. He has been exiled to live alone on a deserted island until he dies. Jesus then pays him a visit and tells him he will not die, but have everlasting life, and he will return one day.

Be the first to review “Son of God Dvd” Cancel reply