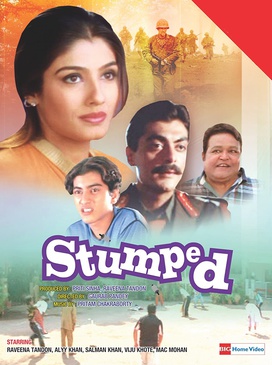 While the entire country is glued to the 1999 cricket world cup and is hoping for India to win, Reena is tensed about her husband, Major Raghav Seth, who is fighting the Kargil war.

Stumped is a 2003 Bollywood sport/drama film written and directed by Gaurav Pandey and produced by Raveena Tandon.This film is a debut for Raveena as producer. Cricketing icon Sachin Tendulkar and actor Salman Khan had a cameo appearance in the film.

Despite a notable promotional campaign, the film had little impact after its release.

Reena and her husband Major Raghav Seth; Ranga Khetrapal, Swadesh Deshpande and their respective wives; Laltu Singh, his wife, Neetu, and son, Bhola; the building watchman, Dukhiram; bachelor Subramaniam; and a visually-challenged Holy man, Baba, are some of the residents in Happy Home Society. The common interest shared by most of them is their love of playing and watching cricket. Reena experiences isolation after her husband is called back to Kargil to battle terrorists. She is befriended by three youngsters who have a crush on her. Things, however, change dramatically after she gets word that her husband is missing and believed dead. But by the end of the film it is revealed that the husband is miraculously alive and reunites with Reena.

Be the first to review “Stumped Dvd” Cancel reply