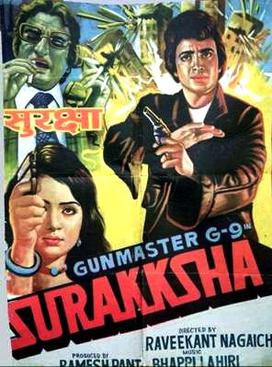 An undercover CBI agent, Gopi, tries to solve the mystery of the death of a junior colleague who left behind a letter with mysterious initials written on it.

Surakksha (English: Protection) is a 1979 Hindi- language film directed by Ravikant Nagaich. The film stars Mithun Chakraborty, Ranjeeta, Jeevan, Jagdeep, Iftekhar, and Aruna Irani. Based as a spy thriller (with hero’s code of Gunmaster G9), it was the first of a two of such films with Mithun in the lead, the other being Wardat. It was a “Super Hit” film at the box office and the ninth highest grossing movie of 1979.

Shiv Shakti Organization (SSO) intends to spread terror in India. The CBI Chief (Iftekhar) learns about this and calls for Officer Gopi (Mithun), aka Gunmaster G-9, to investigate into the matter. The trouble starts when a plane manned by Captain Kapoor (Suresh Oberoi) is attacked by a stream of deadly signals forcelanding it. Soon after, agent Jackson (Tej Sapru) is replaced with his look-alike. Gopi doesn’t take long to get to this and sets out to rescue his agent. During this, he happens to encounter Priya (Ranjeeta), who’s out to investigate her father’s death, supposedly by Gopi. After a few chance encounters, both start to check about the organisation and its high command. Further course of investigation leads them to the Hiralal (Jeevan) working with his men using hi-tech gadgets for this organisation. After few interesting stunts, car-chases, fights, dancing with scantily-clad girls, some romance and comedy by agent Khabri (Jagdeep), they happen to meet the patchy-eyed SSO chief, Doctor Shiva (K. Balaji). The rest of the story show on handling this chief and his organization by the CBI.

Be the first to review “Surakksha Dvd” Cancel reply