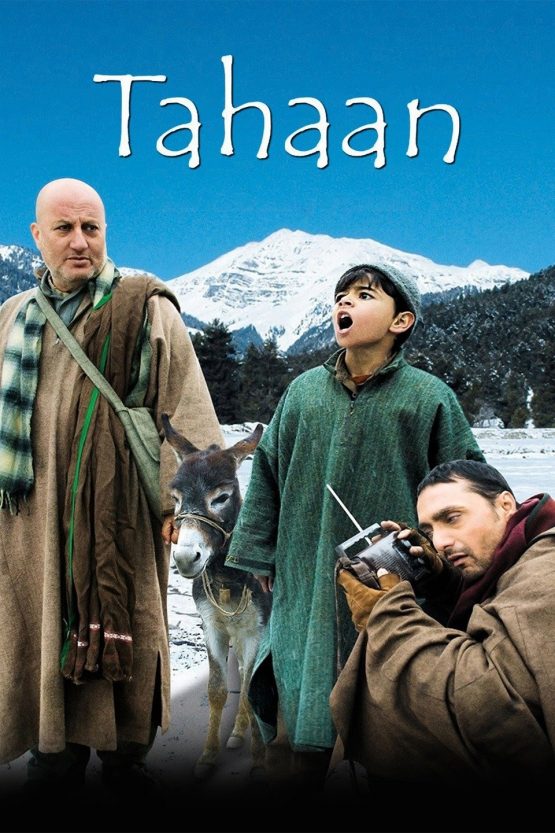 A local moneylender takes away an eight-year-old boy’s pet donkey in lieu of an unpaid loan. When the boy goes to retrieve it, he meets a terrorist who gives him a grenade to fulfil a task.

Tahaan – A Boy With a Grenade is an Indian Hindi-language drama film by Santosh Sivan. The film is based on the life of a young boy and his pet donkey. It is a fable-like journey of the eponymous eight-year-old boy, whose life revolves around the pursuit to find real purpose in his little world. The film stars Purav Bhandare as the young boy. Anupam Kher, Sarika, Rahul Bose, Rahul Khanna and Victor Banerjee form the rest of the cast. It was filmed on location in Jammu and Kashmir.

After salvaging money using various means, Tahaan reaches the moneylender to reclaim Birbal. He is told that old Subhan Dar (Anupam Kher) bought the donkey and went across the mountains in which Tahaan’s father went missing. Gathering courage, Tahaan goes in search of the old man. He finds him and he follows Subhan and his assistant Zafar (Rahul Bose) and their mule train, leading Birbal despite their protests. Although Subhan promises to return Birbal to Tahaan if he can win a race against the incompetent Zafar when he wins Subhan refuses to give him Birbal. Instead, Subhan gives the donkey to his eight-year-old nephew. Zafar tries to give Tahaan his sunglasses as a replacement for the donkey, but Tahaan will not accept the gift.

On his way back home, Tahaan encounters Idrees, a teenager who discourages him, saying that his efforts will not be sufficient to get Birbal back. Instead, he suggests to do him a favour. Tahaan is asked to take a package across the mountains in his onward journey. Upon seeing his eagerness, Idrees hands him over a grenade and says that when the time is right, he will be told what needs to be done. At a checkpoint, the package and grenade are not discovered due to the fact that the soldiers know and trust Subhan Darr. Tahaan is about to commit a terrorist act with the grenade and has already removed the pin when he changes his mind and throws it safely in a river. He then sees his father emerge from the building he almost blew up. Subhan’s nephew learns that Tahaan is fond of Birbal, and at his request, Subhan gives the donkey back to Tahaan.

Be the first to review “Tahaan Dvd” Cancel reply