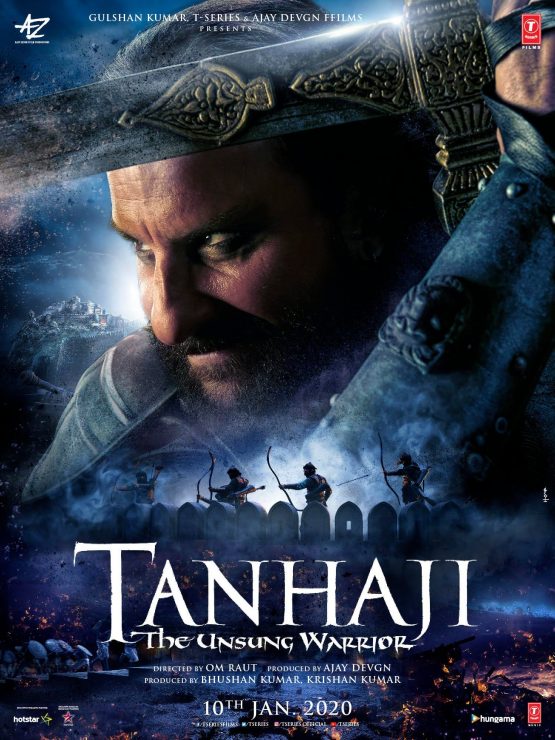 Tanhaji: The Unsung Warrior is a 2020 Indian Hindi-language biographical period action film directed by Om Raut and produced by Bhushan Kumar, Krishan Kumar and Ajay Devgn under T-Series Films and Ajay Devgn FFilms. Tracing the life of Maratha warrior Tanaji Malusare, it stars Ajay Devgn in the titular role along with Saif Ali Khan and Kajol in the lead roles. It also features Sharad Kelkar and Luke Kenny in the pivotal roles. Set in the 17th century, it revolves around Tanaji’s attempts to recapture the Kondhana fortress once it passes on to Mughal emperor Aurangzeb who transfers its control to his trusted guard Udaybhan Singh Rathore.

Principal photography commenced on 25 September 2018, and the film was released in India in 3D and conventional theatres on 10 January 2020. The film received positive-to-mixed reviews from critics, who praised the action sequences, cinematography, performances, and visual effects, but criticised it for its predictability, nationalism, religious bias and historical inaccuracies. Tanhaji grossed ₹367.65 crore (US$52 million) worldwide.

In 1647, Tanhaji’s father trains him in sword-fighting, but later succumbs to a local Mughal massacre. 17 years later in 1664, a now-adult Tanhaji with his younger brother Suryaji, commands Shivaji’s Maratha Army to attack an intruding Mughal cavalry.

In 1665, fearing Shivaji’s rapid imperial expansion in Deccan, the Mughal emperor Aurangzeb dispatches Jai Singh to contain him, winning 33 forts from Shivaji. Then, the Mughal general Beshak Khan orders a quick vacation of the strategic fortress Kondhana, insulting Jijabai, who swears to remain barefoot until the Marathas recapture the fort. Tanhaji is informed about the treaty as well. Five years later, Shivaji’s spy informs him about Aurangzeb’s plan to assign the Kondhana fort to his Rajput general Udaybhan Rathod and to use it as a base for Aurangzeb’s southern imperial expansion. Shivaji plans to recapture Kondhana, considering himself to lead the campaign as Tanhaji, though an able general, can’t be employed due to his personal issue. Meanwhile, Tanhaji celebrates Holi with his family. Marathas begin their war preparations and Shivaji warns his generals to keep Tanhaji from knowing about the campaign, who arrives at Rajgad for inviting Shivaji to Rayba’s wedding. Chandraji Pisal, a Maratha general, reveals Tanhaji about the secret plan by his nephew Chultya’s recommendation, who postpones Rayba’s wedding to lead the campaign.

Elsewhere, Udaybhan reaches Burhanpur while the Marathas discuss his route possibilities. Tanhaji coins an attack plan but Pisal sends Chultya to warn Udaybhan about this, who has captured Kamla Devi, the sister of Udaybhan’s Rajput general Jagat Singh. Chultya informs Udaybhan about Tanhaji’s attack plan and he tricks Tanhaji into attacking Maratha soldiers. Dejected, Tanhaji reaches Kondhana alone to learn about a secret thief-entrance to the fort. Udaybhan reaches Kondhana and aims a huge cannon at Rajgad. A guard is punished for disobeying the protocol and Tanhaji encourages the villagers to fight the invaders. He then participates in a Shivratri event on Kondhana where he kills Chultya for betrayal. Tanhaji is captured and tortured by Udaybhan, who imprisons him. Jagat Singh secretly releases Tanhaji, revealing Udaybhan’s plan to marry his sister. Tanhaji promises to release them from Udaybhan’s clutches. Tanhaji escapes from the thief-entrance and returns to Umrat.

Udaybhan hangs the guards responsible for Tanhaji’s escape and Jagat Singh agrees to marry his sister to Udaybhan on Ashtami’s eve, thus convincing her to fake the marriage preparation until Tanhaji arrives. Tanhaji now plans to directly attack Kondhana during Ashtami night on February 4, 1670. He scales the fort through various entrances and attacks the Mughal army. Udaybhan is alerted and Tanhaji dies in the ensuing battle, although he captures Kondhana before killing Udaybhan. Shivaji arrives at Kondhana to praise a visibly dying Tanhaji for his heroic act. Shivaji himself conducts Rayba’s marriage while Aurangzeb’s dream of winning southern India remains unfilled. The film ends with Savitribai fulfilling her promise of grandly welcoming Tanhaji from his return.

Be the first to review “Tanhaji Dvd” Cancel reply