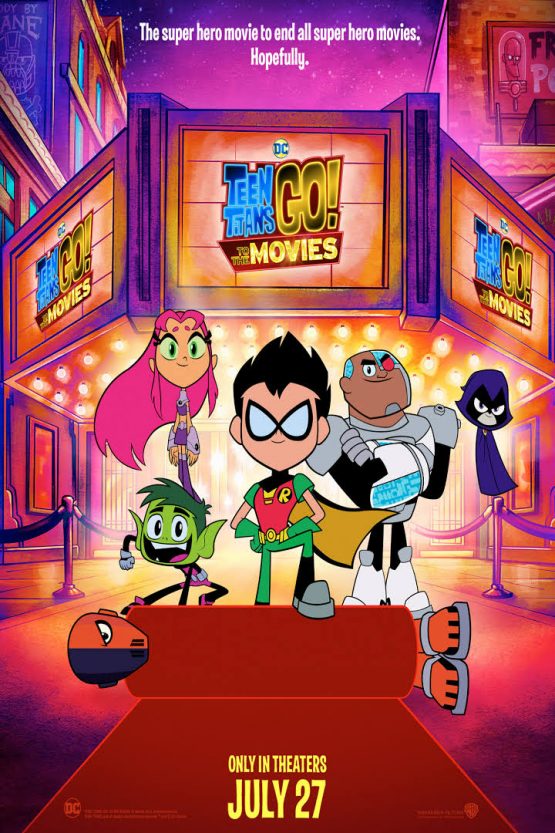 By preying on the Teen Titans’ desire to star in a superhero movie, Slade sets his evil plans into motion and turns them against each other with a mind-controlling device.

Teen Titans Go! To the Movies is a 2018 American animated superhero musical-comedy film based on the television series Teen Titans Go!, which is adapted from the DC Comics superhero team of the same name. This film is written and produced by series developers Michael Jelenic and Aaron Horvath, and directed by series producer Peter Rida Michail and Horvath. The events of the film take place during the fifth season of the series. It is the most recent feature film to date from Warner Bros. Animation to be released theatrically outside of Warner Animation Group.

The film features the voices of Greg Cipes, Scott Menville, Khary Payton, Tara Strong, and Hynden Walch reprising their respective roles from the series, while Will Arnett (who also produced the film) and Kristen Bell join the cast. It was theatrically released in the United States and Canada on July 27, 2018 and became generally available on November 23, 2018, by Warner Bros. Pictures. The film was a box office success, grossing over $52 million worldwide against a $10 million budget, and received positive reviews from critics for its animation quality, cast and storyline.

In Jump City, the Teen Titans arrive to stop Balloon Man. When he fails to recognize them, the Teen Titans jump into a rap song to introduce themselves (“GO!”) and become distracted, forcing the Justice League — Superman, Green Lantern and Wonder Woman — to intervene. They criticize the Titans for their childishness and inability to take their positions as superheroes seriously, while raising the fact that they do not have a feature-length film to prove their legitimacy as superheroes.

While at the premiere of Batman Again, Robin is derided by the audience after a misunderstanding leads him to believe they are making a film about him. At the rest of the team’s suggestion, Robin resolves that in order to get a film made about him and the Titans, they need an arch-nemesis. Nearby, Slade breaks into S.T.A.R. Labs to steal a crystal. The Titans arrive and attempt to stop him, but he swiftly defeats and insults them.

The next day, Starfire, Cyborg, Raven and Beast Boy create a film to cheer up Robin, but he turns it off prematurely and declares that they will go to Hollywood to have a film made about them (“Upbeat Inspirational Song About Life”). Upon arriving at Warner Bros. Studios, they encounter director Jade Wilson, who is responsible for all the Superhero films being made. She turns down the Titans’ request to be in a film (“My Superhero Movie”), explaining that the only way she would make one about them is if they were the only superheroes in the world. The Titans take her words literally, and go back in time to prevent the origins of the other superheroes (“Crystals” and “Back in Time”), but this only ends up ruining the present, forcing the Titans to go back in time again and undo their blunder.

Slade next arrives at Wayne Tech to infuse the crystal’s power and the Titans arrive to stop him, this time putting up an actual fight. They secure the crystal, but Slade escapes, resolving to split Robin from his teammates.

The next day, Jade invites the Titans back to Hollywood and announces that she will make a movie about them due to their fight with Slade. While Robin is given a tour of the premises, Starfire, Raven, Cyborg and Beast Boy venture out and cause mischief (“Shenanigans”). They find a device labeled “DOOMSDAY” and try to destroy it, but Jade arrives and explains that D.O.O.M.S.D.A.Y. is an acronym for a new streaming service for the new movie she is making. She resolves to drop the rest of the Titans from the film and make it solely about Robin, which he happily accepts, much to the consternation of his team, who wish him luck.

During a scene shot on location inside Titans Tower, Jade reveals that she is Slade in disguise. He steals the crystal back and tells Robin that making so many superhero movies was a plan to keep all the heroes busy while he invaded their cities to build D.O.O.M.S.D.A.Y., a device that can control minds and allow him to conquer the world, then he destroys the entire Titans Tower but Robin safely manages to escape the exploding building. In the aftermath, of the wreckage Robin calls his friends and apologizes to them, who make peace with him.

At the premiere of Robin: The Movie, the Titans arrive and unmask Slade, but Slade unleashes the crystal’s power to control the other heroes and sends them after the Titans. Robin goes after Slade while the rest of the team leads off the heroes. However, Slade uses his new power to control Robin, and tells him to attack his friends. They show him the rest of the movie they made for him, causing Robin to come to his senses. Slade attempts to fight them with a giant robot, but the team uses a song (“GO! (Battle Remix)”) to take out Slade, though it is unknown what happened to him after he laughs at his defeat, altogether while also destroying the crystal, snapping the other heroes out of their trance. They all congratulate the Titans for their heroic efforts with Robin admitting that he has learned to be himself without needing a movie.

In a mid-credits scene, the Teen Titans from the 2003–2006 series appear on a distorted screen telling the audience that they “found a way back”. In a post-credits scene, the Challengers of the Unknown, who were trapped in a portal by Raven at the Batman Again premiere earlier in the film, are still trapped, with Professor Haley postulating that they missed the movie.

Be the first to review “Teen Titans Go! To the Movies Dvd” Cancel reply