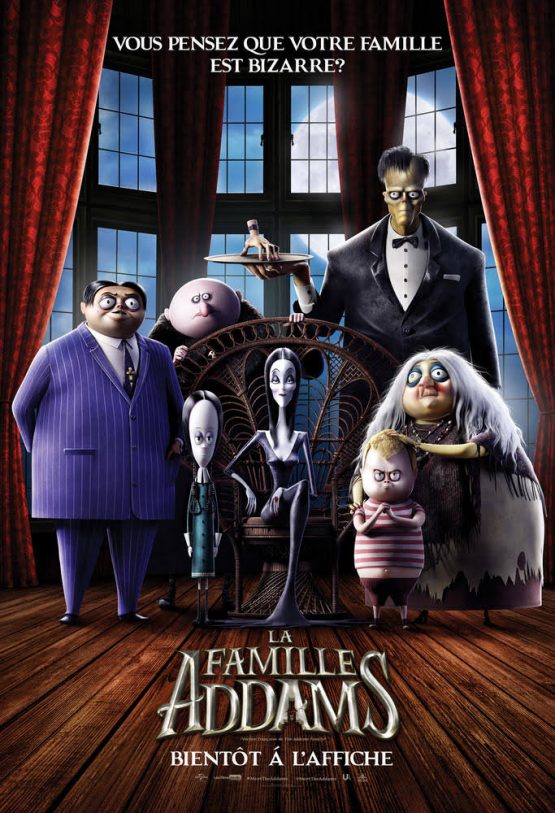 Members of the mysterious and spooky Addams family — Gomez, Morticia, Pugsley, Wednesday, Uncle Fester and Grandma — are readily preparing for a visit from their even creepier relatives. But trouble soon arises when shady TV personality Margaux Needler realizes that the Addams’ eerie hilltop mansion is standing in the way of her dream to sell all the houses in the neighborhood.

The Addams Family is a 2019 computer-animated black comedy directed by Conrad Vernon and Greg Tiernan, written by Matt Lieberman with a story by Lieberman, Erica Rivinoja, and Vernon, and based on the characters created by Charles Addams. The film stars the voices of Oscar Isaac, Charlize Theron, Chloë Grace Moretz, Finn Wolfhard, Nick Kroll, Snoop Dogg, Bette Midler, and Allison Janney. The film was theatrically released in the United States by United Artists Releasing and internationally by Universal Pictures on October 11, 2019. It received mixed reviews from critics and grossed $203 million on a $24 million budget.

A sequel is scheduled to be theatrically released on October 22, 2021 with Vernon and Tiernan returning to direct.

Gomez and Morticia are chased away with the rest of the Addams clan during their wedding ceremony by an angry mob that disapproves of their macabre nature. Grandmama buys Fester time to evacuate Gomez, Morticia, and Thing. Gomez and Morticia decide to move to New Jersey, a place “no one would be caught dead in.” There, Gomez, Morticia, and Thing find their “perfect” home in an abandoned asylum on a hill. They meet Lurch, an escaped mental patient whom they hit when Thing was distracted driving the car, and immediately recruit him as their butler.

Thirteen years later, the Addams family continue to live their gloomy lives in isolation from the outside world. Gomez prepares his son Pugsley for his upcoming Mazurka, a rite of passage that every Addams family member takes. Morticia struggles to keep their daughter, Wednesday, from wanting to experience the world outside of the mansion after a balloon and confetti appear on their property, as the fog surrounding it begins to lift.

Elsewhere, reality TV host Margaux Needler, who is building a perfect planned community called “Assimilation” so her show will have a successful season finale, discovers the Addams family’s household and becomes determined to rid the town of it when the family refuses to change. Wednesday then meets Margaux’s neglected daughter Parker and convinces Morticia to let her attend junior high school. Pugsley struggles with the complicated traditions and pressure of his Mazurka, even with the guidance of Gomez and Uncle Fester. Grandmama arrives at the house for the event.

At school, Wednesday defends Parker and her twin friends Layla and Kayla from the school bully named Bethany and befriends them after she resurrects some dead frogs and commands them to attack Bethany. Later on, the two discuss their frustrations and change their dressing habits – Parker becomes more gothic and Wednesday dresses more colorfully – to the shock of both of their mothers. After an argument with Morticia, Wednesday decides to run away in secret and stay with Parker for a while, which Pugsley inadvertently tells Morticia.

Wednesday and Parker discover a secret room under Parker’s house revealing that Margaux has planted hidden cameras in every house she designed in town and has been spreading rumors about the Addams family through social media, claiming that they are freaks. Margaux catches the two and locks them in the attic, but Wednesday breaks them out. Margaux rallies an angry mob to attack the mansion just as Cousin Itt and the entire Addams clan arrive for Pugsley’s Mazurka.

During the Mazurka, Pugsley fails in front of the whole family, but Gomez reassures him that he is an Addams nonetheless. The mob arrives flinging boulders, severely damaging the mansion and trapping the family inside. Pugsley uses his love of bombs and destruction to defend his family and manages to destroy the mob’s trebuchet. Wednesday and Parker join in and help everyone out of the wreckage safely with help of the living tree Ichabod.

As Margaux tries to take control once more, her treachery is revealed by Parker. They see that the Addams are not monsters, but a family, and Wednesday states that everyone is weird in their own unique way. Margaux’s agent Glenn carries a message from the network stating that her show is now cancelled because Parker was live streaming the whole thing with her phone. As Fester comes up with a compromise to Margaux, Assimilation’s civilians realize the error of their ways.

After they work together to rebuild the mansion, the Addams family and Assimilation’s civilians live in peace. Margaux becomes Fester’s business partner selling homes to the other members of the Addams clan, and Pugsley completes his Mazurka.

Oscar Isaac as Gomez Addams, Morticia’s husband
Charlize Theron as Morticia Addams (née Frump), Gomez’s wife
Chloë Grace Moretz as Wednesday Addams, Gomez and Morticia’s daughter
Finn Wolfhard as Pugsley Addams, Gomez and Morticia’s son
Nick Kroll as Uncle Fester, Gomez’s brother
Bette Midler as Grandmama Addams, Gomez and Fester’s mother
Conrad Vernon as
Lurch, the Addams Family’s butler
An unnamed priest that presides over Gomez and Morticia’s wedding and is one of their relatives
The spirit that haunts the abandoned asylum that Gomez and Morticia move into
Dr. Flambé, a demon-like relative of the Addams family whose head can light on fire
Snoop Dogg as Cousin Itt, Gomez and Fester’s hairy cousin
Allison Janney as Margaux Needler, a sly and greedy reality TV show host and homemaking guru
Martin Short as Grandpa Frump, Morticia’s late father, whom she contacts through a séance
Catherine O’Hara as Grandma Frump, Morticia’s late mother, whom she contacts through a séance
Tituss Burgess as Glenn, Margaux’s agent
Jenifer Lewis as Great Auntie Sloom, Grandmama’s sister with a missing left eye and stilts under her dress
Elsie Fisher as Parker Needler, Margaux’s neglected and rebellious daughter who befriends Wednesday
Aimee Garcia as Denise, a camera operator who works for Margaux
Scott Underwood as Mitch, a member of Margaux’s film crew
Mikey Madison as Candi, a barista that works in Assimilation
Chelsea Frei as Bethany, a girl who picks on Parker
Pom Klementieff as Layla and Kayla, twin girls who are Parker’s friends
Deven Green as Ms. Gravely, a teacher at Parker’s school
Maggie Wheeler as Trudy Pickering, an inhabitant of Assimilation
Harland Williams as Norman Pickering, the husband of Trudy

Be the first to review “The Addams Family Dvd” Cancel reply