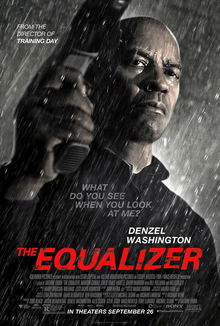 A man believes he has put his mysterious past behind him and has dedicated himself to beginning a new, quiet life, before he meets a young girl under the control of ultra-violent Russian gangsters and can’t stand idly by.

The Equalizer is a 2014 American vigilante action thriller film directed by Antoine Fuqua, loosely based on the 1980s TV series of the same name. Written by Richard Wenk, it stars Denzel Washington, Marton Csokas, Chloë Grace Moretz, David Harbour, Bill Pullman and Melissa Leo. The film focuses on a former US Marine turned Defense Intelligence Agency officer who reluctantly returns to action to protect a teenage sex worker from members of the Russian mafia.

Principal photography began in June 2013 in Massachusetts. It was the first film to have Village Roadshow Pictures co-finance the deal with Sony Pictures since Saving Silverman in 2001.

Robert McCall is a former Marine and DIA operative who faked his death, after promising his now-deceased wife that he would leave his old life behind. For the last few decades, McCall has lived a quiet life in Boston working as a manager at a Home Mart hardware store, where he befriends many of his co-workers and helps a friend named Ralph pass his qualification exam to become a security guard. Unable to sleep, McCall spends some late nights reading in a 24/7 diner where he befriends Alina, a teenage prostitute working for the Russian mafia.

One night, Alina is hospitalized after being brutally beaten by her pimp, Slavi. Hearing of the beating, McCall visits Alina’s hospital room and speaks with her friend, Mandy. McCall visits Slavi and offers to pay $9,800 for Alina’s freedom. Slavi refuses, dismissing McCall as old and impotent. McCall then kills Slavi and four of his men with skillful close combat efficiency, using the men’s own weapons, various objects in the office, and his bare hands.

Vladimir Pushkin, Slavi’s boss and a powerful mafia kingpin, sends his enforcer, Teddy Rensen, to find and eliminate the culprit. In the meantime, Ralph withdraws his security guard application, and instead takes a second job with his mother at the family restaurant. When McCall learns that the restaurant was set on fire by corrupt policemen as an act of extortion, he confronts and beats the officers, forcing them to pay back all the money they have extorted by threatening to publicize their crimes. Ralph then returns to Home Mart and passes his test, becoming a security guard at the store.

Rensen visits Mandy, questioning her about who could have killed Slavi. When Mandy tells him that “a nice man–a black man” had come to visit Alina in the hospital, he kills her to cover his tracks. A robber holds up McCall’s store and steals a cashier’s ring. After the ring is mysteriously returned, McCall is seen cleaning a bloodied sledgehammer with a cloth and putting it back on display in the store.

After finding video footage of McCall entering the club where Slavi was murdered, Rensen visits McCall at his apartment disguised as a police officer and later makes two attempts to capture him. However, McCall escapes after killing a hitman who tries to ambush him at the diner and knocking out one of Rensen’s associates. McCall then visits old friend and fellow former DIA operative Susan Plummer, who uses her resources to give him information on Pushkin and his operations. Plummer also informs McCall that Teddy Rensen’s true name is Nikolai Itchenko, a former member of the Russian secret police with Spetsnaz training.

Stepping up his actions against Pushkin, McCall subdues Frank Masters—a crooked detective on Pushkin’s payroll who has been helping Rensen—and forces him to help him gain access to one of Pushkin’s local money-laundering operations. Once there, McCall holds the gangster running the operation at gunpoint, subdues his cronies, and orders Masters to inform the police of the money-laundering operation. From Masters, McCall obtains a memory stick loaded with information about Pushkin’s illegal activities, which he emails to the FBI. McCall then confronts Itchenko at a restaurant, revealing that he knows his history and pledging to bring down Pushkin’s criminal enterprise. When McCall destroys a container ship Pushkin used to smuggle goods, Pushkin has had enough and orders Itchenko to kill the operative.

Itchenko and his men go to Home Mart and take Ralph and several of McCall’s other co-workers hostage, threatening to kill them if McCall does not surrender. After arriving at Home Mart, McCall kills Itchenko’s henchmen one by one using booby traps constructed with items in the store; however, he is wounded in the process. After a struggle between McCall and one of Itchenko’s men, Ralph comes back to pull the injured McCall out of the store, but is shot in the leg himself. After Ralph escapes, McCall confronts Itchenko and kills him with a nail gun.

Three days later, McCall travels to Moscow, kills all of Pushkin’s guards at his mansion, and tricks him into electrocuting himself. After his return to the United States, McCall is approached by Alina outside a neighborhood grocery store, learning that she has started a new life after being freed from Slavi’s control. She thanks McCall for giving her a second chance. McCall is inspired to continue using his skills to help people in need and posts an online advertisement, now identifying himself as “The Equalizer”.

Be the first to review “The Equalizer Dvd” Cancel reply