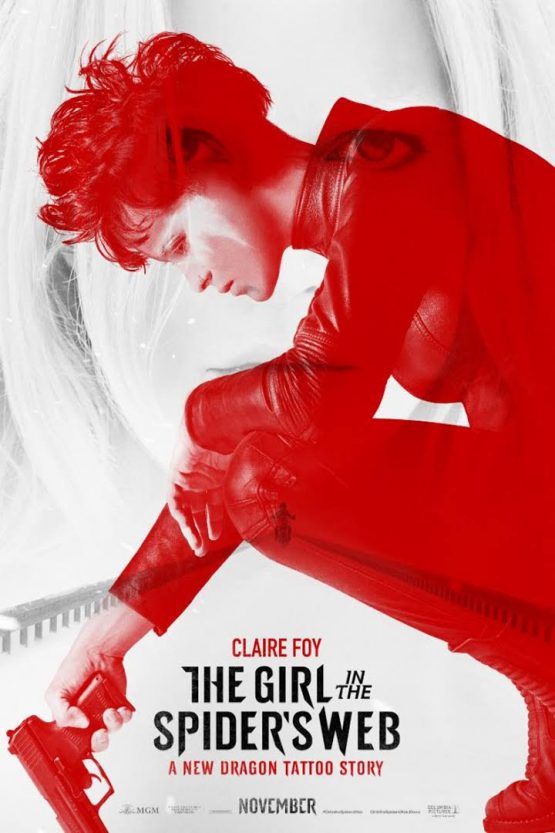 The Girl in the Spider’s Web Dvd

Hacker Lisbeth Salander retrieves Firefall, a dangerous NSA computer programme. However, after mercenaries steal it from her, Lisbeth finds herself facing the underworld and Swedish law enforcement.

The Girl in the Spider’s Web is a 2018 action-thriller film directed by Fede Álvarez and written by Álvarez, Steven Knight, and Jay Basu, and based on the novel of the same name by David Lagercrantz, which in turn is based on characters in the Millennium book series by Stieg Larsson. The film acts as both a soft-reboot[dubious – discuss] and a sequel to David Fincher’s The Girl with the Dragon Tattoo. It stars Claire Foy, taking over the role of Lisbeth Salander from Rooney Mara, and follows Salander as she battles against a mysterious notorious organization, The Spiders, who are seeking world anarchy. Sverrir Gudnason, Lakeith Stanfield, Sylvia Hoeks, and Stephen Merchant also appear in the film.

The Girl in the Spider’s Web had its world premiere at the Rome Film Festival on October 24, 2018, and was theatrically released by Sony Pictures Releasing in Sweden on October 26, 2018, and in the United States on November 9, 2018. A box-office bomb, the film grossed $35.2 million worldwide and received mixed reviews from critics, although Foy’s performance was praised.

In Stockholm, Sweden, computer programmer Frans Balder hires vigilante hacker Lisbeth Salander to retrieve Firefall, a program he developed for the National Security Agency that can access the world’s nuclear codes. Balder believes it too dangerous to exist. Lisbeth successfully retrieves Firefall from the NSA’s servers, but she is unable to unlock it. Her actions attract the attention of NSA agent Edwin Needham.

Mercenaries led by Jan Holtser steal the program from Lisbeth and attempt to kill her, though she survives. When she misses a scheduled rendezvous with Balder, he mistakenly believes Lisbeth has kept Firefall for herself and contacts Gabrielle Grane, the deputy director of the Swedish Security Service (Säpo). Grane moves Balder and his young son, August, to a safe house. Meanwhile, Needham tracks the unauthorized login to Stockholm and arrives there seeking Lisbeth and Firefall.

Lisbeth and her hacker friend, Plague, contact Lisbeth’s former lover, investigative journalist Mikael Blomkvist, for help identifying her assailants. Blomkvist learns Holtser previously worked for Lisbeth’s late father, crime lord Alexander Zalachenko, and is now affiliated with an elusive international crime syndicate known as “The Spiders”. Lisbeth puts surveillance on Balder’s safe house, and when it is attacked, she intervenes, attempting to protect Balder and his son. She is intercepted by Holtser, who kills Balder and frames Lisbeth, then kidnaps August. Lizbeth pursues them and rescues August. Lisbeth also learns the Spiders’ leader is her sister, Camilla Salander, whom Lisbeth believed was dead. As children, Lisbeth escaped their abusive father, leaving Camilla behind after she hesitated to leave. After years of physical and sexual abuse, Camilla faked her suicide and went underground to form the Spiders.

Lisbeth takes August to another safe house, where she confirms only he can unlock Firefall. Elsewhere, Needham locates Lisbeth’s girlfriend, Sofia, and persuades her to arrange a meeting between them, intending to lure Lisbeth into a trap. Lisbeth evades him, and Needham is later arrested by Grane. Lisbeth helps him escape in exchange for him safely escorting August to San Francisco to reunite him with his mother; she begrudgingly agrees to later give him Firefall.

The Spiders trick August by calling him from his father’s cellphone, then track him to Lisbeth’s safe house. Camilla and the Spiders take August to her base of operations, the sisters’ childhood home. Grane had hired the Spiders to retrieve Firefall for her and informed them of Balder’s location, but Camilla kills Grane instead.

Using a tracker hidden on August, Lisbeth, Blomkvist, Plague, and Needham locate him. Lisbeth breaks in to give Plague remote computer access to the building’s surveillance system. She is caught and taken to where August is being held. She learns that Blomkvist has also been captured. When Camilla threatens to torture him, Lisbeth tells August to trust her and to reveal the Firefall password. Camilla tries suffocating Lisbeth while describing their father’s abuse.

Armed with a .50 BMG sniper rifle and remotely guided by Plague via computer, Needham fires through brick walls, eliminating Camilla’s henchmen, saving August and Blomkvist. Camilla escapes with the laptop containing Firefall, and Lisbeth pursues her. Holtser, injected with a poison that induces blindness, stumbles through some woods onto a road where he is fatally hit by Camilla’s fleeing car. The vehicle crashes into the trees. Camilla, injured, escapes into the woods. Lisbeth pursues her to a nearby clifftop, where Camilla tearfully asks why she never returned for her; Lisbeth says Camilla chose to remain with their father rather than escape with her. Camilla, heavily bleeding, drops the laptop computer and steps off the cliff to her death before Lisbeth can stop her.

Needham attempts to access Firefall only to discover Lisbeth has destroyed it. August is reunited with his mother in the United States. Blomkvist writes an investigative article about the Spider’s Web to be published in Millennium, but then deletes it. Lisbeth destroys her childhood home as closure, then rides away on her motorcycle.

Claire Foy as Lisbeth Salander, a computer hacker who has survived severe emotional and sexual abuse.
Beau Gadsdon as Young Lisbeth Salander
Sverrir Gudnason as Mikael Blomkvist, a journalist for Millennium and lover/partner of Lisbeth.
Lakeith Stanfield as Edwin Needham, a National Security Agency (NSA) security expert who is tracking Salander.
Sylvia Hoeks as Camilla Salander, Lisbeth’s estranged sister, who is the head of a major crime syndicate.
Carlotta von Falkenhayn as Young Camilla Salander
Stephen Merchant as Frans Balder, a terminated employee of the NSA who developed a program called Firefall, which accesses the world’s nuclear codes. He requests Salander’s help in destroying his program, which he believes to be too powerful for any player.
Vicky Krieps as Erika Berger, the publisher of Millennium.
Claes Bang as Jan Holtser, Camilla’s accomplice.
Christopher Convery as August Balder, Frans’ son.
Synnøve Macody Lund as Gabriella Grane, the deputy director of the Swedish Security Service (Säpo).
Cameron Britton as Plague, a close associate of Lisbeth—a computer expert to whom she reaches out when she needs assistance.
Andreja Pejić as Sofia, Lisbeth’s lover/partner.
Mikael Persbrandt as Alexander Zalachenko, father to Lisbeth and Camilla Salander.
Volker Bruch as Peter Ahlgren