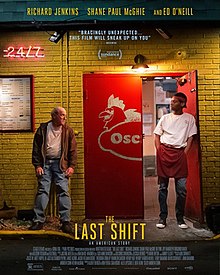 A rookie cop’s 1st shift alone in the last night of a closing police station turns into a living nightmare.

It had its world premiere at the Sundance Film Festival on January 27, 2020. It was released on September 25, 2020, by Sony Pictures Releasing.

Be the first to review “The Last Shift Dvd” Cancel reply