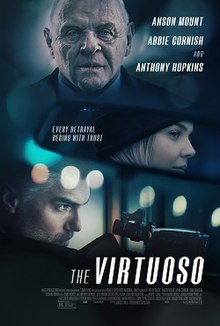 Danger, deception and murder descend upon a sleepy town when a professional assassin accepts a new assignment from his enigmatic boss.

The Virtuoso is a 2021 American thriller film, directed by Nick Stagliano and starring Anson Mount, Abbie Cornish, and Anthony Hopkins.

Be the first to review “The Virtuoso Dvd” Cancel reply