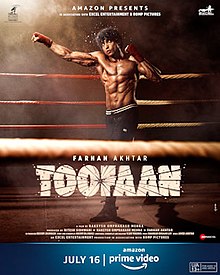 The film premiered on 16 July 2021 on Amazon Prime Video.This is the second collaboration between Akhtar and Mehra after Bhaag Milkha Bhaag, a biographical sports movie released in 2013.The film received mixed reviews from film critics, who praised Akhtar’s performance but criticized the film for its screenplay and predictable plot.

Toofaan (transl. Storm) is a 2021 Indian Hindi-language sports drama film directed by Rakeysh Omprakash Mehra and starring Farhan Akhtar as a national level boxer, alongside Mrunal Thakur and Paresh Rawal in supporting roles.The film premiered on 16 July 2021 on Amazon Prime Video.This is the second collaboration between Akhtar and Mehra after Bhaag Milkha Bhaag, a biographical sports movie released in 2013.The film received mixed reviews from film critics, who praised Akhtar’s performance but criticized the film for its screenplay and predictable plot.

Plot
Aziz Ali (Farhan Akhtar) is an orphaned extortionist in Dongri who beats up shopkeepers for money. He gets into a fight and goes to a hospital, where the doctor, Ananya Prabhu (Mrunal Thakur) criticizes him for being an extortionist and orders him out. One day, at a local boxing school, Ali comes across a video of Muhammad Ali and decides to start boxing.

He goes to Coach Narayan “Nana” Prabhu’s (Paresh Rawal) boxing school but is defeated in a match because of his lack of technique. When he visits the hospital again, Ananya is kinder when she learns that he was taking care of and buying gifts for orphaned children, but later on, sees him rough up a person on the street. When he confronts her, she asks him if he wants to be a boxer or a gangster.

He decides to come back to Nana’s boxing school after quitting his extortionist role and begins to train.

Eventually, he gets his boxing license, and starts winning matches, and is dubbed “Toofaan” by Nana. He also begins to form a romantic relationship with Ananya, and Nana angrily berates him when he finds out, thinking that Aziz is conning his daughter Ananya. He is also angry that Aziz is in a relationship with a Hindu as he is a Muslim. Nana Prabhu also disowns his daughter and asks her to leave his house. Aziz and Ananya start looking for a place but find it difficult to live for two religious differences. The only house that they can stay in requires Aziz to return to his gangster role for his old boss, which he refuses. Instead, Ananya goes to a girls’ hostel.

At his next boxing match, someone offers Aziz a large sum of money to lose, which he does, but then is uncovered, and receives a five-year boxing ban. After reconciling with Ananya, they marry, and sometime later, have a child, whom they name Myra. However, Nana stops speaking to Ananya, and does not want to meet the baby. Five years later, Aziz is an unfit father to Myra who receives his reinstatement boxing letter, but he trashes it because he does not want to return to boxing. After telling Ananya that he doesn’t want to restart boxing, she goes behind him and gets his new boxing license.

On the way back, at the train station, there is a stampede at the crosswalk, and Ananya dies. Seeing his boxing license, Aziz decides to restart boxing and get back in shape to fulfill Ananya’s dream. Meanwhile, Nana begins to spend more time with Myra after Ananya’s death. Aziz gets back in shape and wins a few matches, but in one match, the judge, Darmesh Patil (Darshan Kumar) is a former state champion who Aziz defeated earlier and pays the referee to let the other boxer win, who performs a series of under-the-belt illegal punches and wins, as the referee doesn’t call it out.

Later, Nana meets up with Patil and secretly records Patil telling the story, who is fired from the boxing federation. Aziz then has a chance to fight again, but it facing Prithvi Singh (Gaganpreet Sharma), who is a famous boxer who sends his opponents to the hospital before the second round can begin. At first, Azis begins to lose, but Nana comes back to coach him and tells him to fight the match for Ananya, and Aziz wins.

Be the first to review “Toofaan dvd” Cancel reply