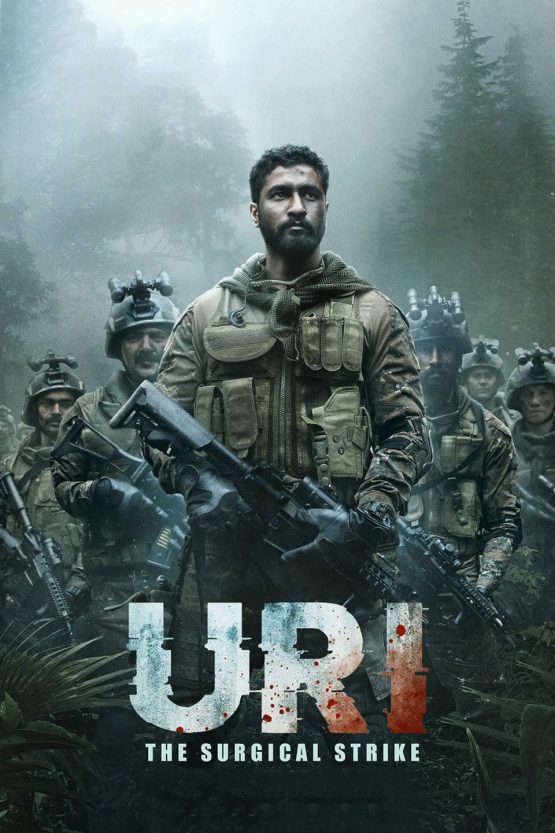 Major Vihaan Singh Shergill of the Indian Army leads a covert operation against a group of militants who attacked a base in Uri, Kashmir, in 2016 and killed many soldiers.

Uri: The Surgical Strike is a 2019 Indian Hindi-language military action film. It is directed and written by debutant Aditya Dhar. Produced by Ronnie Screwvala, the film stars Vicky Kaushal, Paresh Rawal, Yami Gautam, Mohit Raina and Kirti Kulhari in lead roles. The plot is a dramatised account of the retaliation to the 2016 Uri attack, following Major Vihaan Singh Shergill of the Indian Army, who plays a leading role in the events.

The film was released on 11 January 2019 and grossed ₹342.06 crore (US$53 million) worldwide. It has received generally positive reviews from critics and ranks among the highest-grossing Indian films. The film has been a recipient of various accolades.

The film is divided into five chapters.

The first chapter opens up with an ambush in June 2015 on the convoy of the Indian Army troops in Chandel, Manipur by NSCN(K) militants. In retaliation, Major Vihaan Singh Shergill (Vicky Kaushal), a Para SF officer and his unit including his brother-in-law Major Karan Kashyap (Mohit Raina) infiltrate and attack the Northeastern militants and also kill its key leader responsible for the ambush. After a successful strike the Prime Minister of India (Rajit Kapur) congratulates him and the whole unit at a formal dinner. Vihaan requests an early retirement as he wants to be close with his mother, who is suffering from Stage VI Alzheimer’s on which the Prime Minister offers him a desk job at New Delhi near his mother instead of retirement to which he agrees.

The second chapter shows Vihaan taking a desk job at the Integrated Defence Staff HQ in New Delhi and him spending time with his family. This segment also shows a brief description of the Pathankot attack. A nurse named Jasmine D’Almeida (Yami Gautam) is assigned to take care of Vihaan’s mother. Vihaan meets an Indian Air Force pilot named Flight Lieutenant Seerat Kaur (Kirti Kulhari) who is trying to prove her patriotism to her martyred husband who was an army officer who died in an ambush. One fine day his mother goes missing. He searches for her and he blames Jasmine for ignorance and tells Jasmine that there is no need for her security. Vihaan’s mother is found under a bridge and Jasmine reveals herself as an intelligence agent. The film reveals a note of why the families of the special forces soldiers were given security due to the threat from the North-eastern terrorists.

On 18 September 2016, four heavily armed militants attack the brigade headquarters at Uri, Jammu and Kashmir at dawn, killing 19 soldiers in their sleep. The terrorists are killed but Karan dies in grenade explosion due to accidentally pulling the pin which was attached to the terrorist’s rifle, which he picked up to examine. The whole family becomes devastated including Vihaan. The Ministry decides to take strict action against the perpetrators of the attack. National Security Advisor Govind Bharadwaj (Paresh Rawal) suggests the idea of a surgical strike. The Prime Minister gives it a go and gives ten days for the strike. Vihaan leaves his desk job and leaves for Northern Command base in Udhampur. He requests Chief of the Army Staff General Arjun Singh Rajawat (Shishir Sharma) to count him in the operation to which he agrees. Vihaan chooses the elite Ghatak Force commandos from the Bihar Regiment and the Dogra Regiment along with the special forces as most of the soldiers killed in the attack were from these regiments. Vihaan informs them that they are no longer able to use their phones, and disguises the mission as regular training exercises. The commandos begin their training.

During the planning, Govind ropes in ISRO (for providing satellite images), DRDO (for drone surveillance) and RAW (for intelligence). When he goes to meet the DRDO Chief Brian D’Souza (Ivan Rodrigues), he chances to meet an intern named Ishaan who has developed a drone called Garuda which looks and is shaped like an Eagle.[20] With the help of the drones and satellite images they are able to get the exact location of the hideouts and training camps of the terrorists. Jasmine reveals her true name as Pallavi Sharma to Vihaan and during an interrogation, the two are able to extract information about who planned the attack. He chooses Seerat to be his pilot, who agrees wholeheartedly. Govind also suggests to intensify the artillery shelling at the border for distraction and also to paint their assault helicopters with Pakistani Air Force markings. The commandos also start training under Vihaan. The Pakistani officials suspect the Indian activities but dismiss it due to underestimation.

On the night of 28 September, the commandos leave for the strike in Pakistan controlled Kashmir in Mi-17 helicopters. During the mission Vihaan’s helicopter is forced not to cross the Line of Control due to latest intelligence from spies in Pakistan that the Pakistani Army has deployed an “AWAC” Early Warning Radar-based Surface to Air Missile system in Muzafarabad sector to bring their helicopter down. He and his team improvise by going on foot through a cave (which was very risky due to darkness and the unknown presence of other terrorists). His team successfully infiltrate and kill all the terrorists on the two launchpads. Similarly, other commando teams also manage to kill all of the terrorists. Vihaan kills Idris and Jabbar, who are the perpetrators of the Uri attack. The local police are alerted and the commandos who are low on ammunition and time escape. On their way back, they are heavily rained down upon by gunfire from both a nearby machine gun bunker and a Pakistani Air Force Mi-17 Helicopter which was scrambled to intercept Vihaan’s team. Flight Lieutenant Seerat comes to their rescue by firing back both at the Pakistani gunship thus driving it away and eliminating the machine gun bunker. His team successfully crosses LoC on the Indian side with no casualties. The rest of the assigned teams are also successful and are back with no casualties. Vihaan lands at Hindon Air Force Station at Ghaziabad, Uttar Pradesh. The film ends with him, Pallavi, Govind and the commandos happily having a formal dinner with the Prime Minister.

In a post-credits scene, Zameer, a Pakistani minister wakes up and shouts in frustration while seeing the news of India’s successful surgical strike and the scene cuts to a title card reading “Jai Hind” (Victory to India).

Be the first to review “Uri: The Surgical Strike Dvd” Cancel reply