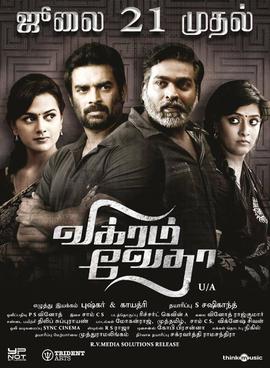 Vikram, a no-nonsense police officer, accompanied by Simon, his partner, is on the hunt to capture Vedha, a smuggler and a murderer. Vedha tries to change Vikram’s life, which leads to a conflict.

Vikram Vedha is a 2017 Indian Tamil-language neo-noir action thriller film[4] written and directed by Pushkar–Gayathri and produced by S. Sashikanth under his banner YNOT Studios. The film stars Madhavan, Vijay Sethupathi, Shraddha Srinath, Kathir and Varalaxmi Sarathkumar while Prem, Achyuth Kumar, Hareesh Peradi and Vivek Prasanna play supporting roles. Inspired by the Indian folktale Baital Pachisi, the film tells the story of Vikram (Madhavan), a police inspector who sets out to track down and kill Vedha (Sethupathi), a gangster. After Vedha voluntarily surrenders himself, he tells Vikram three stories which change his perceptions of good and evil.

In January 2015, Sashikanth revealed that he would be producing a film directed by the husband and wife duo, Pushkar and Gayathri. Following a year of development on the script throughout 2015, Madhavan and Sethupathi were selected to play the lead roles in February 2016. Principal photography began in November of the same year and was completed by January 2017. The film was shot mainly in North Chennai, with the area being used as its backdrop. Sam C. S. composed the soundtrack and score, P. S. Vinod performed the cinematography, and the film’s editor was A. Richard Kevin.

Vikram Vedha was released on 21 July 2017 and received positive feedback, with critics praising all major aspects of the production. Made on a budget of ₹110 million (about US$1,661,631 in 2017), the film performed well at the box office, grossing ₹600 million (about US$9,063,444 in 2017) worldwide despite experiencing difficulties due to the changes resulting from the implementation of the Goods and Services Tax. Vikram Vedha won four Filmfare, Vijay and Norway Tamil Film Festival awards each. Additionally, it received three Ananda Vikatan Cinema Awards, two Techofes Awards and an Edison Award.

Plot
Vikram is a brave and honest police inspector who is decisive about right and wrong. Vedha is a criminal who understands the grey shades between good and evil. Vikram leads an encounter unit formed to eliminate Vedha. In one encounter, the squad kills some of Vedha’s henchmen, framing the death of a criminal killed by Vikram to avoid further inquiry. When Santhanam, one of the youngest members in the unit, is nervous about this, Vikram calms him by saying that he sleeps peacefully, knowing that the men he shot were criminals. As the unit plans another encounter, Vedha enters the police station and surrenders. When Vikram interrogates Vedha, he offers to tell him a story.

The story relates to how Vedha became a gangster and drug smuggler. Vedha warns his younger brother Vignesh, called Pulli due to his arithmetic skills, to stay away from crime, but Pulli is forced by a rival gangster, Ravi, to carry drugs. When Pulli is caught by the police, he confesses, and Ravi is arrested. On his boss Sangu’s orders, Ravi assaults Pulli, leaving a permanent mark on his hand. Vedha asks Vikram if he should kill Ravi or Sangu. Vikram replies that Ravi was an instrument; Sangu was the real culprit. Vedha says the answer is correct, implying that he killed Sangu. Vedha’s lawyer, who turns out to be Vikram’s wife Priya, intervenes and bails him out.

Vikram realises that the unarmed person he shot was Pulli, based on the mark in his hand. Worried that Vedha might try to kill his colleague and best friend Simon, Vikram rushes to save him. He finds him and Chandra, Pulli’s girlfriend, shot dead. Surendhar, the superintendent of police, dismisses it as a failed encounter. Priya refuses to divulge Vedha’s whereabouts to Vikram, testing their marriage. Angered by this, Vikram raids Vedha’s tenements and manages to capture him. Vedha requests Vikram to listen to another story.

The second story starts with Pulli, now an adult, offering to launder Vedha’s income investing it in shares. Vedha’s boss Cheta invests five million rupees in this venture. However, Chandra is supposedly kidnapped, and the money is missing. Chandra returns and reveals that she stole the money to start a new life but came back because she loves Pulli. Vedha returns the money to Cheta, who orders him to kill Chandra. Vedha asks Vikram if he should respect Cheta and carry out the order or disobey him and support Pulli, resulting in a gang war. Vikram replies that he should support Pulli, to which Vedha agrees. Realising that Pulli’s innocence causes Vikram to stumble momentarily. Vedha attacks and subdues Vikram, telling him to investigate Simon and Pulli’s deaths.

Vikram begins his investigation with Simon’s informant who led them to Pulli’s hideout. But upon seeing Cheta there, he rushes to find out that the informant has been killed. He and his unit fan out and try to search for the killer. Vikram takes a moment to recollect when he hears one of the members of the Kerala Quotation Gang from Vedha’s story when he uses a similar swear phrase in Malayalam. He apprehends and fights him only for the gang member to almost overpower Vikram before getting shot and killed by Santhanam. Vikram searches his room but doesn’t find anything, much to his dismay. He grabs a cigarette and smokes it, only to cough due to the cigarette being filled with Marijuana instead of Tobacco. He recollects Vedha’s story and realises that Ravi had a similar cigarette. He informs Vedha, via a restaurant that Vedha and Cheta used to visit, who brings Ravi to an abandoned factory. Vikram arrives to find Ravi beaten up by Vedha, who then tells Vikram the third and final story. Vedha had sent Pulli and Chandra to Mumbai. He noticed that only his men, not Cheta’s, are being targeted and eliminated by the police. Based on Ravi’s confession, Vedha says that Simon was paid by Ravi to kill his men. Vedha asks Vikram if Simon was right, since he became corrupt to pay for his critically ill son’s medical procedure. Vedha kills Ravi and escapes before Vikram can answer.

Surendhar and the unit arrive. He castigates Vikram for letting Vedha escape again. Vikram slowly realises that the entire unit had also been paid by Ravi. Surendhar reveals that Ravi paid them to kill Vedha and that Chandra’s abduction was intended to get Pulli out of Mumbai, which would lure Vedha out of hiding. The guilt-ridden Simon had gone to save Chandra, but the unit killed both of them. As the unit prepares to kill Vikram, Vedha reappears and saves him. A gunfight ensues, and Vikram disables his colleagues, who were mere pawns, but kills Surendhar. Vikram asks Vedha if he should let him go for saving his life or kill him since he is a criminal. The film ends with a standoff between them.

Be the first to review “Vikram Vedha dvd” Cancel reply