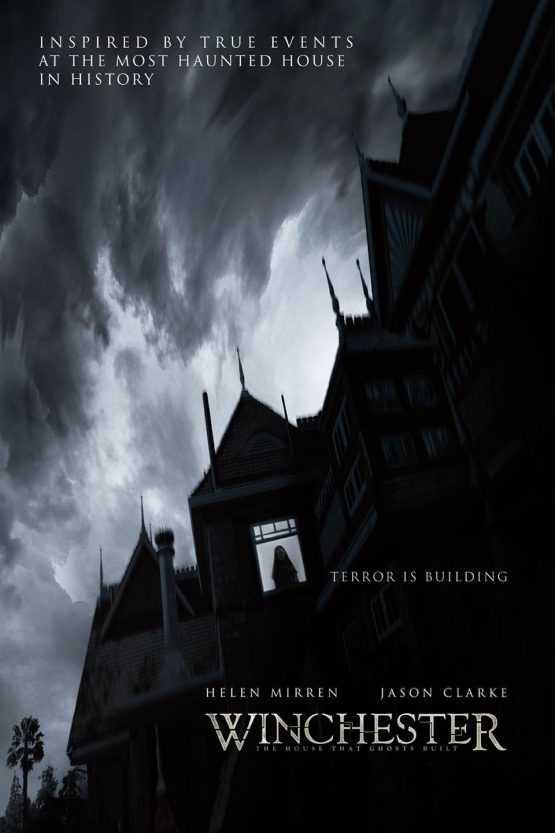 The most haunted house in the world sits on an isolated stretch of land that’s 50 miles outside of San Francisco. Built by Sarah Winchester, heiress to the Winchester fortune, it stands seven stories tall and contains hundreds of rooms. To an outsider, it looks like a monstrous monument to a disturbed woman’s madness. But Sarah’s actually building a prison, an asylum for hundreds of vengeful ghosts — and the most terrifying among them have a score to settle with the Winchesters.

Winchester (also known as Winchester: The House That Ghosts Built) is a 2018 supernatural horror film directed by Michael and Peter Spierig, and written by the Spierigs and Tom Vaughan. The film stars Helen Mirren as heiress Sarah Winchester, with Jason Clarke and Sarah Snook, and follows Winchester as she is haunted by spirits inside her San Jose mansion in 1906.

An American-Australian co-production, the film was released in the United States on February 2, 2018 and in Australia on February 22, 2018. The movie grossed $46 million worldwide, over ten times its budget. However, it received negative reviews from critics, who called it “dull” and “pointless”. At the 39th Golden Raspberry Awards, the film was nominated in four categories, including Worst Picture and Worst Actress for Mirren, but failed to “win” any awards.

Sarah Winchester is the widow of famed gun manufacturer William Wirt Winchester. Her husband’s sudden death and the previous death of their child Annie have left her in grief. Having received more than twenty million dollars in inheritance, Winchester convinces herself she is cursed by the ghosts of those who died at the hands of Winchester firearms. After seeking advice from a medium, she begins building an enormous, seemingly never-ending mansion in San Jose, California that would eventually be named the Winchester Mystery House. The house is under constant construction and Sarah’s niece Marion Marriott lives in the house with her son Henry. At night, Henry is possessed by a mysterious entity.

In 1906, the Winchester company hires Doctor Eric Price to stay at the house and assess Sarah, believing she is mentally unfit to remain in charge of the company. Eric is grieving from the death of his wife Ruby and is reliant on drugs. He arrives at the house and has a ghostly vision that he believes is a side-effect of the drugs he has taken. Later, he spots a ghost in the basement and witnesses a possessed Henry jump off the roof. Eric saves him.

The next day, Eric begins to conduct his assessment of Sarah’s mental well-being. Sarah admits her fear of ghosts and believes she can help them move on. She reveals that she knows about Eric’s drug problem and confiscates his supply of laudanum. That night, Eric witnesses a seemingly possessed Sarah draw a plan for a new room. He is startled by an entity and flees back to his room. The next day, Sarah shows Eric that she keeps records of people killed by Winchester rifles. It is revealed that Eric had actually been shot and killed by a Winchester rifle before being revived, and he keeps the refurbished bullet with him. Sarah explains how thirteen nails keep spirits sealed in rooms.

A possessed Henry attempts to kill Sarah with a rifle, but is stopped by Eric and Marion. Realizing how violent this spirit is, Sarah sends her staff away and decides to personally remove the ghost from her home. Eric encounters a butler who reveals himself to be a ghost. He and Sarah identify the ghost as Benjamin Block, a Confederate States Army soldier who lost his two brothers in the American Civil War, killed by Winchester rifles. A devastated Ben proceeded to shoot up a Winchester office, massacring the workers before being shot dead by police. Ben has been the one possessing Henry; the constructed room with the Winchester guns is the room where he was shot dead.

The 1906 San Francisco earthquake takes place, devastating the house and separating Eric and Sarah. In the chaos, a possessed Henry escapes his room and is pursued by Marion. Eric encounters several ghosts before seeing the ghost of Ruby his wife. It is revealed that Ruby could see and hear ghosts but was misdiagnosed as “delusional” by Eric. Depressed that he wouldn’t believe her, the unstable Ruby shot Eric before killing herself with a Winchester rifle. Ruby’s ghost comforts Eric, inspiring him to help Sarah. Eric reunites with Sarah and they manage to trap Ben in the room. Marion and Henry are cornered by Ben’s brothers. Ben attempts to murder Sarah, but the pair realizes that Ben is scared of the bullet Eric kept. Eric has been able to see the ghosts in the house due to his dying from that bullet beforehand. Eric uses the bullet in the rifle that Ben used in the shooting and banishes him. Henry and Marion are saved and the other spirits return to their rooms.

Eric pronounces Sarah sane, allowing her to remain in control of the company. Sarah announces her intent to build more rooms to help more spirits. As the house is being repaired, the camera returns to view the hall of boarded up rooms and catches a nail falling out of one of the boards that is sealing a spirit in a room.

Be the first to review “Winchester Dvd” Cancel reply