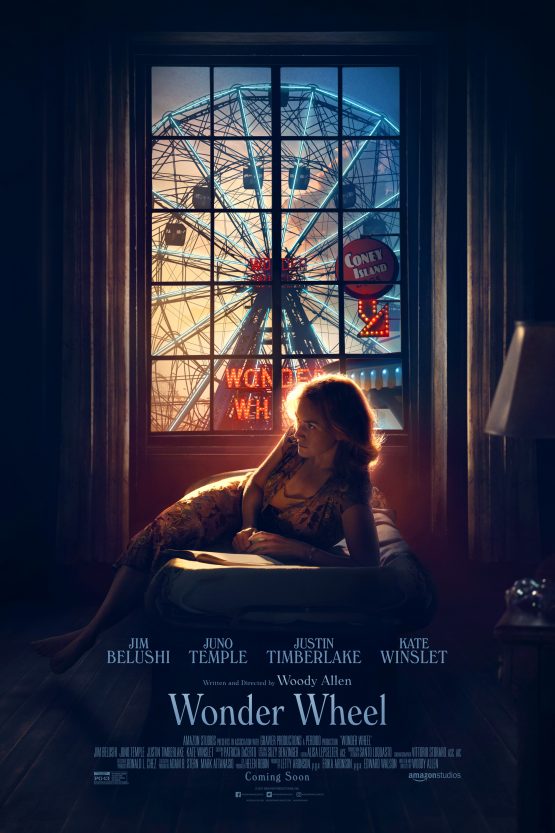 Four peoples’ lives intertwine amid the hustle and bustle of the Coney Island amusement park in the 1950s: Ginny, an emotionally volatile former actress now working as a waitress in a clam house; Humpty, Ginny’s rough-hewn carousel operator husband; Mickey, a handsome young lifeguard who dreams of becoming a playwright; and Carolina, Humpty’s long-estranged daughter, who is now hiding out from gangsters at her father’s apartment.

Wonder Wheel is a 2017 American period drama film written and directed by Woody Allen and starring Jim Belushi, Kate Winslet, Juno Temple, and Justin Timberlake. Set in the early 1950s at an amusement park on Coney Island, the film takes its title from the park’s Ferris wheel. The story follows the second wife and the estranged daughter of a carousel operator as they both pursue affairs with a lifeguard.

The film served as the closing night selection at the 55th New York Film Festival on October 14, 2017, and was released on December 1, 2017 by Amazon Studios. The film received mixed reviews, but with praise for Winslet’s performance and the cinematography.

Mickey Rubin, a Coney Island lifeguard who aspires to be a playwright like Eugene O’Neill, narrates through the fourth wall. Carolina, the daughter of Humpty Rannell, arrives at the boardwalk looking for Ginny Rannell, her father’s second wife who works as a waitress at the clam shack. She begs Ginny to let her live with them, but Ginny leaves it up to Humpty, who angrily kicked her out when she married her mobster boyfriend Frank and threw away her college education and chance for a better life. Carolina tells him she is on the run from Frank, who she believes wants to kill her because she gave evidence of mob activity to the FBI. Humpty lets her stay on the condition that she save money to return to college and better her life. Ginny gets her a waitressing job where she works. Soon, Mobsters Angelo and Nick come around, asking Humpty and Ginny for Carolina, but they deny having seen her and the mobsters leave.

Ginny used to be an actress and was happily married, but her infidelity caused her husband to divorce her. She and Humpty are raising her young son Ritchie, a troubled boy who habitually gets into trouble by setting fires. She is unhappy with Humpty and life on the boardwalk, and begins carrying on an affair with Mickey. Humpty is an angry and loud recovering alcoholic who runs the carousel and goes fishing with his friends to bring home dinner. He finds joy and patience for life with Carolina around, and he pays for her to attend night school.

Mickey is attracted to Ginny’s maturity and experience, and views her as a damsel in need of saving. He and Carolina accidentally meet some time later, and he becomes attracted by Carolina’s story. He thinks he is in love with her, but is conflicted about his feelings for Ginny. Ginny steals money from Humpty to buy Mickey an expensive watch as a birthday present, which he refuses to accept. By this time, Ginny has become suspicious of Mickey’s feelings for Carolina and is jealous.

Mobsters Angelo and Nick come around again, asking the owner of the clam shack about Carolina’s whereabouts. Carolina takes Mickey on a date to a Brooklyn pizza parlor, and her boss innocently tells this to Angelo and Nick. Ginny telephones the pizza parlor to warn Carolina but begins to stammer, realizing her opportunity to take Carolina away from Mickey, and hangs up. Mickey tells Carolina the truth about his feelings for her and his affair. Instantly feeling compassion for everyone involved, Carolina walks home alone to process the information and decide what to do, not wanting to hurt Ginny or her father or Mickey. We see Angelo and Nick’s car following her as she leaves the pizza parlor.

When Carolina does not come home, Humpty asks Mickey the next day if he saw her after the date. Mickey investigates and learns Ginny called the pizza parlor but did not speak. Piecing it together, he confronts Ginny, who has started drinking and getting made up in one of her glamorous stage costumes. She pulls a knife out of the drawer and asks Mickey to kill her, but he leaves. Humpty comes back, sinking back into alcoholism after the police find no trace of Carolina, and tells Ginny he needs her help again to function in life. He tries to find a positive outlook and invites her to meet his friends’ wives on a fishing trip, but she coldly refuses, keeping their life in its rut.

Be the first to review “Wonder Wheel Dvd” Cancel reply