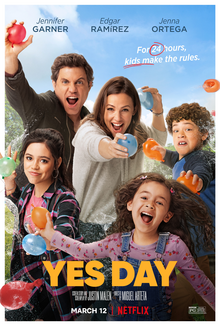 A mom and dad who usually say no decide to say yes to their kids’ wildest requests with a few ground rules on a whirlwind day of fun and adventure.

Yes Day is a 2021 American comedy film directed by Miguel Arteta, from a screenplay and screen story by Justin Malen, based upon the children’s book of the same name by Amy Krouse Rosenthal and Tom Lichtenheld. It stars Jennifer Garner, Édgar Ramírez, and Jenna Ortega.

Allison and Carlos Torres are married with three kids: Katie, Nando, and Ellie. When they first met, they were adventurous and said yes to everything. However, once having kids, they feel they must say no to protect their children.

Be the first to review “Yes Day dvd” Cancel reply