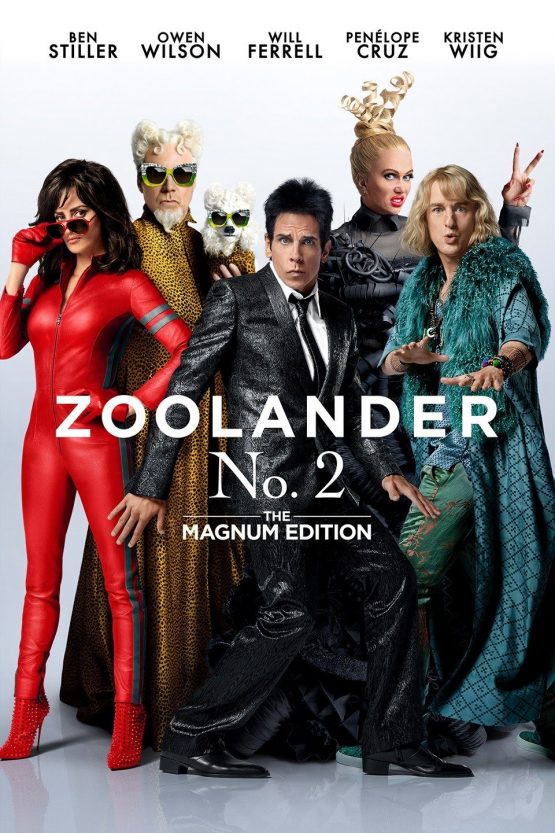 After being in isolation for years, Derek and Hansel find themselves recruited by Interpol to unearth the mystery behind the assassinations of prominent celebrities from all over the world.

Zoolander 2 (seen in promotional material as Zoolander No. 2) is a 2016 American action-comedy film directed by Ben Stiller and written by John Hamburg, Justin Theroux, Stiller, and Nicholas Stoller. It is the sequel to the 2001 film Zoolander and stars Stiller, Owen Wilson, Will Ferrell, Penélope Cruz, and Kristen Wiig.

Filming took place from April to July 2015, in Rome, Italy. The film was released on February 12, 2016, by Paramount Pictures to generally negative reviews from critics and earned $56 million against a $55 million budget.

At the fashion show, Derek and Hansel are surprised to find that the ever-changing fashion world is now dominated by the likes of Don Atari and the non-binary All. They are put on the runway in “Old” and “Lame” outfits and are doused by a large bucket of prunes. Afterwards, Alexanya congratulates them on their performance.

After reuniting, Derek and Hansel are tracked down by Valentina, who asks them to help Interpol uncover who is behind the systematic assassinations. With Valentina’s help, Derek discovers his son is residing at a local orphanage. They find him, but Derek is distraught by his son’s obesity. After Matilda’s ghost asks him to protect their son, Hansel convinces Derek to accept Derek Jr. After meeting the Headmaster, Derek takes his son around Rome. However, Derek Jr. becomes disgruntled with his father and returns to the orphanage.

Hansel receives an anonymous call, requesting that he travel to St. Peter’s Basilica at midnight. He, Derek, and Valentina go to the church and meet with Sting, who tells them the tale of Adam and Eve and the little-known Steve, a secret that many popstars have died to protect. It is said that Steve is the common ancestor of all models and that he and his closest descendant (Derek Jr) holds the bloodline of the Fountain of Youth. Derek returns to the orphanage, only to find it in disrepair and his son and the Headmaster gone.

Jacobim “Mugatu” Moogberg tricks him into trading places with him so he can escape. Mugatu leaves on a helicopter while Hansel stows away by hiding on top of the rotor. Derek and Valentina swim back to Rome while Hansel infiltrates the House of Atoz. He witnesses Mugatu reuniting with Alexanya and killing Don Atari.

Hansel finds Derek Jr. imprisoned and reunites with Derek and Valentina at the IncrediBALL. They enter a bathhouse through a rear entrance and witness Derek Jr. strapped to a sacrificial table. Mugatu and many of the world’s fashion designers prepare to cut out Derek Jr.’s heart and consume his blood, believing it to grant them eternal youth as it contains the blood of Steve. Derek, Hansel, and Valentina stop Mugatu from proceeding and he reveals that he brought together the world’s fashion designers to kill them as revenge for leaving him imprisoned.

Alexanya, who is actually Katinka Ingaborgovinananananana in disguise, attacks Valentina, while Mugatu tells Derek that he was behind the destruction of his Center by hiring the construction crew to build a faulty base. He then throws an explosive towards the lava. Derek manages to stop it with “Magnum”, but he struggles to keep it suspended in mid-air. Sting arrives and reveals that he is Hansel’s father, and they, along with Derek Jr. releasing the look, “El Niño”, successfully hurl the explosive back at Mugatu, presumably killing him in process.

Derek Jr. forgives his father for his mother’s death and Derek and Valentina confess their love for each other. Matilda’s ghost gives them her blessing and says that Mugatu live-streamed the event. Six weeks later, Derek and Hansel have returned to modeling. Hansel returns to living with his orgy and is now the father of 10 children. Derek and Valentina have a daughter named Darlene, while Derek Jr. becomes the next model and now in a relationship with Malala Yousafzai. As the end credits start rolling, Derek and Hansel celebrate their heroism with their friends, Derek’s family, and a newly reformed Mugatu, who has survived from the explosion.

Be the first to review “Zoolander 2 Dvd” Cancel reply