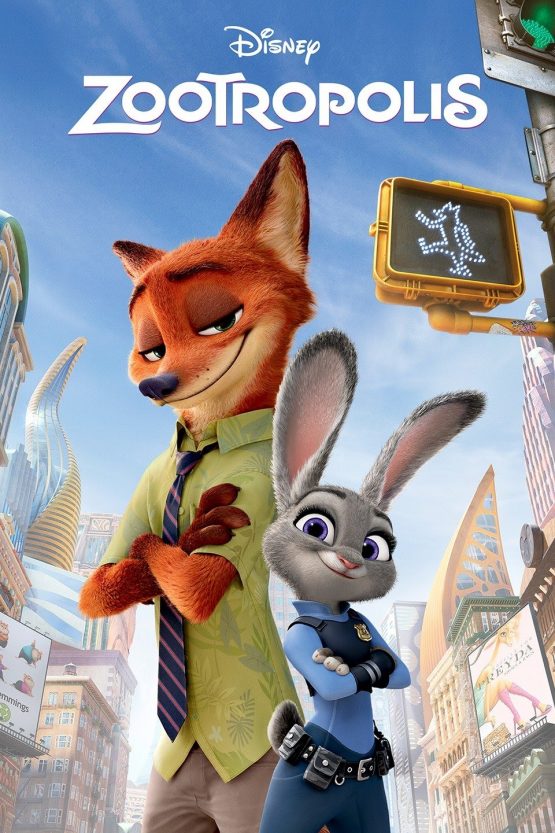 When Judy Hopps, a rookie officer in the Zootopia Police Department, sniffs out a sinister plot, she enlists the help of a con artist to solve the case in order to prove her abilities to Chief Bogo.

Zootopia premiered at the Brussels Animation Film Festival in Belgium on February 13, 2016, and went into general theatrical release in Disney Digital 3-D, RealD 3D, IMAX 3D, and 4DX formats in the United States on March 4. Zootopia received generally positive reviews from critics, who praised its screenplay, animation, voice acting, subject matter, and Michael Giacchino’s musical score. It opened to record-breaking box offices in several countries, and earned a worldwide gross of over $1 billion, making it the fourth-highest-grossing film of 2016. The film earned numerous accolades; it was named one of the top ten best films of 2016 by the American Film Institute, and received an Academy Award, Golden Globes, Critics’ Choice Movie Award, and Annie Award for Best Animated Feature Film, it also received a nomination for the BAFTA Award for Best Animated Film, but lost to Kubo and the Two Strings.

In a world of anthropomorphic mammals, rabbit Judy Hopps from rural Bunnyburrow fulfills her childhood dream of becoming a police officer in urban Zootopia. Despite being the academy valedictorian, Judy is delegated to parking duty by Chief Bogo, who doubts her potential because she is a rabbit. On her first day, she is hustled by a con artist fox duo, Nick Wilde and Finnick.

Judy abandons parking duty to arrest Duke Weaselton, a weasel who stole a bag of crocus bulbs known as Midnicampum holicithias. Bogo reprimands her, but an otter, Mrs. Otterton, enters Bogo’s office pleading for someone to find her husband Emmitt, one of fourteen predators who are missing. When Judy volunteers and Assistant Mayor Dawn Bellwether praises the assignment, Bogo has no choice but to give Judy the case, stipulating she has 48 hours to find Emmitt Otterton and that she must resign if she fails.

Judy blackmails Nick into assisting her by covertly recording his confession to tax evasion, having ascertained from photo evidence that Nick was the last to see Emmitt. They track Emmitt to a limousine owned by crime boss Mr. Big, who reveals Emmitt went “savage”—reverted to a feral state—and attacked his chauffeur Manchas. At his home, Manchas mentions Emmitt yelled about “Night Howlers” before the attack. Then Manchas himself turns savage and chases the pair. Judy saves Nick by trapping Manchas, and calls the ZPD for help. When help arrives, Manchas has vanished. Bogo demands Judy turn in her badge, but Nick reminds Bogo that Judy still has 10 hours to solve the case.

At City Hall, Bellwether offers Judy and Nick access to the city’s traffic cameras. They discover Manchas was captured by wolves, whom Judy surmises are the “Night Howlers”. They locate the missing predators—all gone savage—imprisoned at Cliffside Asylum, where Mayor Leodore Lionheart hides them from the public while trying to determine the cause of their behavior. Lionheart and the asylum staff are arrested for false imprisonment and Bellwether becomes the new mayor.

Judy, praised for solving the case, has become friends with Nick and asks him to join the ZPD as her partner. However, she upsets him at a press conference by blaming predatory biology for the recent savage behavior, resulting in him to angrily reject her offer; her comments also incite hateful speech and discrimination against predators throughout Zootopia. Wracked with guilt, Judy quits her job and returns to Bunnyburrow.

Back home, Judy learns the Night Howlers are actually the crocus bulbs Weaselton stole, and they contain a neurotoxin that has severe psychotropic effects on mammals. After returning to Zootopia and tearfully reconciling with Nick, the duo confront Weaselton, who, with persuasion from Mr. Big, tells them the bulbs he stole were for a ram named Doug. They find Doug in a laboratory hidden in the city subway, developing a drug made from Night Howlers, which he has been shooting at predators with a dart gun.

Judy and Nick obtain the serum as evidence, but before they can reach the ZPD, Bellwether confronts them in the Natural History Museum and takes the evidence, revealing herself as the mastermind behind a prey-supremacist conspiracy to frame predators as dangerous and savage. Bellwether traps them in an exhibition after Nick refuses to abandon an injured Judy. She shoots a serum pellet at Nick to make him attack Judy, and summons the ZPD for help. But Judy and Nick have replaced the serum pellets in Bellwether’s gun with blueberries. Enraged, Bellwether threatens to frame the pair for the attacks before discovering that Judy baited her into openly declaring her role in the attacks and recorded the confession, just as Bogo and his fellow officers arrive on the scene.

Bellwether and her accomplices are arrested for their crimes, while Lionheart publicly denies knowledge of her plot and states that his imprisonment of the infected predators was a “wrong thing for the right reason”. With the cause of the epidemic identified, the predators are cured and Judy rejoins the ZPD. Nick graduates from the Zootopia Police Academy as the city’s first fox police officer and becomes Judy’s partner.

Ginnifer Goodwin as Judy Hopps, a young optimistic rabbit from Bunnyburrow who is a newly appointed member of the Zootopia Police Department assigned to the 1st Precinct.
Della Saba voices a younger Judy Hopps.
Jason Bateman as Nick Wilde, a sly red fox who is a small-time con artist.
Kath Soucie voices a younger Nick Wilde.
Idris Elba as Chief Bogo, an African buffalo who is the police chief of the Zootopia Police Department’s 1st Precinct.
Jenny Slate as Bellwether, a diminutive sheep who is the assistant mayor of Zootopia.
Nate Torrence as Officer Clawhauser, an obese cheetah who works as a dispatcher and desk sergeant for the Zootopia Police Department’s 1st Precinct.
Bonnie Hunt as Bonnie Hopps, a European rabbit from Bunnyburrow who is the mother of Judy Hopps.
Don Lake as Stu Hopps, a European rabbit from Bunnyburrow who is the father of Judy Hopps and a known carrot farmer.
Tommy Chong as Yax, a laid-back domestic yak who is the owner of the naturist club Mystic Springs Oasis in Sahara Square.
J. K. Simmons as Mayor Lionheart, a lion who is the noble, but pompous Mayor of Zootopia.
Octavia Spencer as Mrs. Otterton, a concerned North American river otter whose husband Emmitt Otterton has gone missing.
Alan Tudyk as Duke Weaselton, a small-time least weasel crook who is also known for selling bootleg DVDs. The name is a reference to the Duke of Weselton from Frozen, whom Tudyk also voices.
Shakira as Gazelle, a Thomson’s gazelle who is a famous pop star. Shakira also voices Gazelle in the Spain and Latin America Spanish dubs.
Raymond S. Persi as Flash, the “fastest” three-toed sloth in the DMV (short for Department of Mammal Vehicles).
Persi also voices Officer Higgins, a hippopotamus who is an elite member of the Zootopia Police Department’s 1st Precinct.
Maurice LaMarche as Mr. Big, an Arctic shrew who is the most fearsome crime boss in Tundratown and is served by a group of polar bears.
Phil Johnston as Gideon Grey, a red fox from Bunnyburrow who used to bully the young rabbits and sheep when he was young. As an adult, he has made amends with those he picked on and became a much-respected baker.
Johnston also voices an angry offscreen character who states that his taxes pay Judy’s salary upon being given a parking ticket by her.
Fuschia! as Major Friedkin, a polar bear who works at the Zootopia Police Academy as a drill instructor.
John DiMaggio as Jerry Jumbeaux Jr., an ill-tempered African elephant who owns an ice cream parlor called Jumbeaux’s Café which is frequented by elephants and other larger mammals.
DiMaggio also voices Woolter and Jesse (a pun on the show Breaking Bad’s main protagonists), two tough rams who are Doug’s assistants; a moose that gets a parking ticket from Judy; and a pig reporter.
Katie Lowes as Dr. Madge Honey Badger, a honey badger who helps Mayor Lionheart look for the cause of the animals going savage.
Gita Reddy as Nangi, an Indian elephant who works as a yoga instructor at Mystic Springs Oasis.
Jesse Corti as Manchas, a black jaguar from Zootopia’s Rainforest District who is a chauffeur for Zootopia’s biggest limo company and is the personal chauffeur to Mr. Big.
Tom Lister Jr. as Finnick, a fennec fox who is Nick’s partner in crime.
Josh Dallas as an unnamed frantic domestic pig who is the owner of the “Flora and Fauna” flower shop that is robbed by Duke Weaselton and frantically asks Judy for help. He later appears as a protestor at Gazelle’s peace rally arguing with a female leopard.
Leah Latham as Fru Fru, the daughter of Mr. Big who disapproves of her father doing his criminal business during her wedding. She befriends Judy after Judy saves her from a runaway doughnut shop sign in Little Rodentia and later names her unborn child after her.
Rich Moore as Doug, an emotionless ram chemist and sniper with puffy wool who works for Assistant Mayor Bellwether.
Moore also voices Larry, a gray wolf that is a security guard at Cliffside Asylum.
Fabienne Rawley and Peter Mansbridge as Fabienne Growley and Peter Moosebridge, the snow leopard and moose anchors of the ZNN News.
The moose co-anchor is used in the standard version of the film, released in the United States, Italy, France, Canada, Russia, and Mexico. In the UK version, the moose is named as Moosos Alexander, voiced by radio journalist Vassos Alexander (though the UK home release used his US name and voice). In other countries, the anchor is a different animal voiced by a different person. David Campbell voices a koala newscaster named David Koalabell in the Australian and New Zealand versions. The Brazilian version uses a jaguar named Onçardo Boi Chá who is voiced by Ricardo Boechat. The Japanese version uses a tanuki named Michael Tanuyama who is voiced by Kazumasa Kōra. The Chinese version uses an unnamed giant panda.
Byron Howard as Bucky Oryx-Antlerson, a greater kudu who is the neighbor of Judy Hopps and Pronk’s husband.
Howard also voices Travis, Gideon Grey’s black-footed ferret friend.
Jared Bush as Pronk Oryx-Antlerson, a gemsbok who is the neighbor of Judy Hopps and Bucky’s husband.
Mark “Rhino” Smith as Officer McHorn, a black rhinoceros police officer who is part of the Zootopia Police Department’s 1st Precinct.
Josie Trinidad as Mrs. Dharma Armadillo, a nine-banded armadillo who is the landlady of the Grand Pangolin Apartments that Judy Hopps moves into.
John Lavelle as the unnamed construction mouse foreman of Little Rodentia’s construction crew who receives the Pawpsicle sticks from Nick and Finnick.
Kristen Bell as Priscilla, a three-toed sloth who is Flash’s co-worker at the DMV.
Zach King as a muzzled wolf, who is captured by the ZPD and magically escapes.

Be the first to review “Zootropolis Dvd” Cancel reply