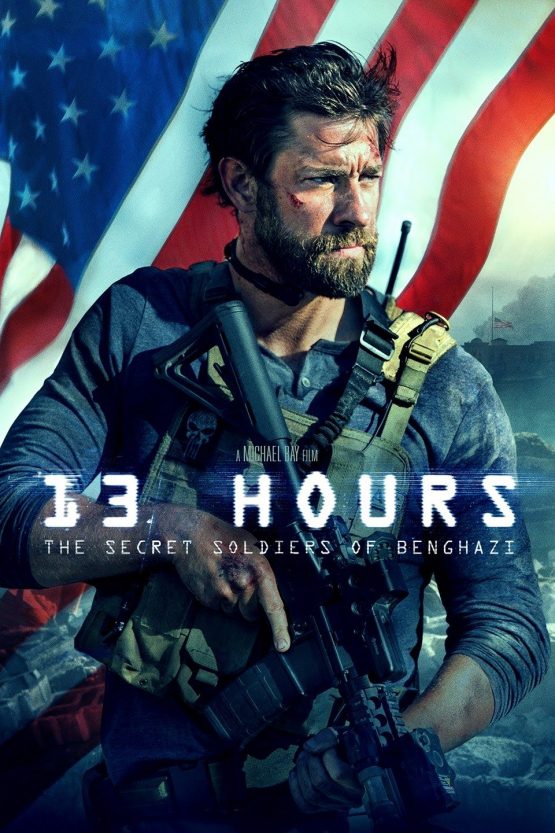 A security team consisting of six members fights to defend an American diplomatic compound in Benghazi, Libya, against a wave of terrorist attacks.

Filming began on April 27, 2015 in Malta and Morocco. Known colloquially as “the Benghazi movie”, the film was released on January 15, 2016, by Paramount Pictures. Upon release, 13 Hours received generally mixed reviews from critics and grossed just $69 million worldwide against a budget of $50 million, becoming Bay’s lowest-grossing film to date, with particular criticism directed at Bay’s bombastic direction.

The film received an Oscar nomination for Best Sound Mixing at the 89th Academy Awards.

See also: 2012 Benghazi attack
In 2012, Benghazi, Libya is named one of the most dangerous places in the world, and countries have pulled their diplomatic offices out of the country in fear of an attack by militants. The United States still has a diplomatic compound (not an official consulate) open in the city. Less than a mile away is a CIA outpost called “The Annex”, which is protected by a team of private military contractors from Global Response Staff (GRS). New to the detail is Jack Silva, who arrives in Benghazi and is picked up by Tyrone “Rone” Woods, commander of the GRS team and a personal friend of Silva. Arriving at the Annex, Silva is introduced to the rest of the GRS team and the CIA Chief of Station, who constantly gives the team strict reminders to never engage the citizens.

Prior to the U.S. Ambassador’s arrival, the GRS team members visit the Special Mission, the location where the Ambassador will be staying. They review the location and warn its Diplomatic Security (DS) agents about the risk of minimal security arrangements and the high probability of a surprise attack due its volatile circumstances. The U.S. Ambassador Chris Stevens arrives in Benghazi to maintain diplomatic connections amidst the political and social chaos, with limited protection from five Diplomatic Security (DS) agents, principally, Scott Wickland and Dave Ubben, along with guards hired from the local February 17th Martyrs Brigade militia, nicknamed “17-Feb”. On the morning of the eleventh anniversary of the September 11 attacks, Stevens notices suspicious men taking pictures of the compound and notifies his security detail. Back at the Annex, Silva finds out that his wife is pregnant.

That night, a group of militants from Ansar al-Sharia assault the compound. The 17-Feb guards are quickly overrun, allowing the attackers easy access to the compound. Wickland takes Stevens and Smith, an IT specialist, into the safe room. Unable to breach the safe room, the attackers set the building on fire hoping to burn the men out. Wickland is able to escape but loses both Stevens and Smith. At the Annex, the GRS team desperately wants to go to the compound to help, but the Chief refuses, fearing that the team’s departure would expose the Annex. However, the team dispatches to the compound and meets up with the DS agents. Silva and Woods go into the building to try to find Stevens and Smith, but are only able to find Smith’s body. After an intense firefight inside the compound against the militants, the DS team retreats; but after Wickland goes in the wrong direction, they are followed by militants on their way back to the Annex. Later, the GRS team also retreats to the Annex.

Knowing an attack by the militants is imminent, the CIA staff of the Annex makes several desperate calls for help. The only help they can get is from Glen “Bub” Doherty, a GRS officer in Tripoli, who forms a team including two Delta operators that fly to Benghazi after several delays. Meanwhile, the GRS team fends off the militants as they try to breach the Annex perimeter. After repelling the largest attack wave, the Annex receives word from ISR that help is en route.

The Tripoli GRS reinforcements arrive and begin preparing the CIA and DS staff to depart for the airport. The militants launch a mortar attack in which Ubben and Geist are wounded; Geist’s left arm is partially severed. Woods rushes to aid Geist and is killed by another mortar round. Doherty is also killed when a third mortar detonates directly in front of him.

With the GRS team compromised, and the Annex now vulnerable, the remaining GRS operators watch as a convoy of vehicles rolls toward the Annex. Fearing the worst, the operators prepare to make a final stand, until it is revealed that the convoy is an element of the Libya Shield Force militia escorting the GRS reinforcements. They also find out that Stevens was found behind the compound, but was pronounced dead at the hospital.

At the airport, the CIA staff and the wounded Geist board the plane to Tripoli while the remainder of the GRS team waits for the next plane with the bodies of Stevens, Smith, Woods and Doherty. Closing titles reveal that all of the surviving members of the Annex security team received contractor medals in a private ceremony and have since retired from the GRS team and live with their families, and that Geist was able to save his arm after several surgeries.

Be the first to review “13 Hours: The Secret Soldiers of Benghazi Dvd” Cancel reply