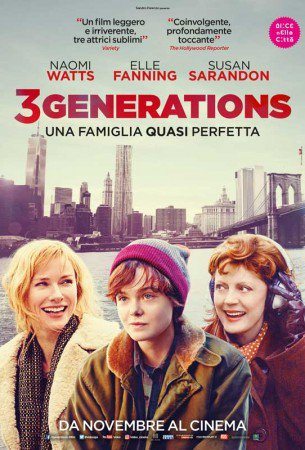 Hoping to get support from his mother (Naomi Watts) and grandmother (Susan Sarandon), a New York teen (Elle Fanning) prepares to transition from female to male.

3 Generations (also marketed in some markets as About Ray) is a 2015 American comedy-drama film directed by Gaby Dellal and written by Nikole Beckwith and Dellal. The film stars Elle Fanning, Naomi Watts, Susan Sarandon, Tate Donovan and Sam Trammell. It premiered in the Special Presentations section of the 2015 Toronto International Film Festival, under the title About Ray. The film was released on May 5, 2017, by The Weinstein Company. Teenager Ray (Fanning) realizes and pursues his true identity as male and his mother Maggie (Watts), lesbian grandmother Dolly (Sarandon) and absent father Craig (Donovan) must learn to accept him for who he is.

The film opens with 16-year-old Ray with his mother Maggie, grandmother, and grandmother’s partner at the doctor getting final instructions on gender transition. Ray lives with his unmarried mother, who lives with her domineering lesbian mother, Dolly and her partner, Frances. The four live together and they all have trouble with the new gender terms. Dolly thinks it would be easier if Ray would just be a lesbian, while Maggie understands that Ray is a transgender man.

Ray is ready to start testosterone shots and change schools, but he needs written consent from both parents. Ray’s father is an absent parent and Maggie is afraid to make such a permanent decision. Maggie locates the 10-year absent father but he wants some time to think. Blaming father Craig’s indecision gives Maggie time to stall. On his own, Ray locates his father to find him, married with three children. He also learns that Maggie slept with Craig’s brother and “uncle” Matthew might be his real father. Maggie is the reason he never had a father. Ray feels lied to, alone, and as though he will be trapped in a female body forever.

Grandma Dolly decides it is time for the four to have a man in the house. She now supports Ray’s transition to a man. Matthew and Maggie talk. Craig signs the consent form after the Maggie signs. Ray finds happiness. The movie ends with everyone out to dinner at a Japanese restaurant.

Be the first to review “3 Generations Dvd” Cancel reply