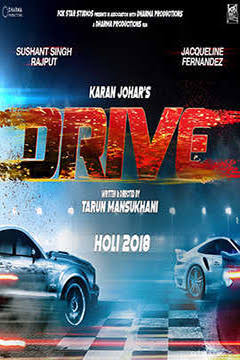 Drive is a 2019 Indian Hindi-language action thriller heist film written, edited and directed by Tarun Mansukhani and produced by Hiroo Yash Johar, Karan Johar and Apoorva Mehta under Dharma Productions.Starring Sushant Singh Rajput, Jacqueline Fernandez, Vikramjeet Virk and Sapna Pabbi, the story of the film revolves around the manhunt for an infamous ‘King’ for a robbery of 300 Kilograms of gold. An undercover agent infiltrates a street racing gang who is chasing the King.The film was scheduled to release on 7 September 2018, but was pushed to 28 June 2019, ultimately to not see a theatrical release. It was directly released on Netflix on 1 November 2019.

Vibha Singh is a corrupt bureaucrat in the Accounts Department of the Indian Government who pushes many of her clients into giving her “percentages” of their money which may either have been stolen or confiscated. With the support of her assistant Hamid, she continues to do so and keeps hiding the money in a basement of the Rashtrapati Bhavan which is only known to her, and resumes her lifestyle until she receives news from Kirit Ojha, the Honorary Secretary to the Prime Minister, that her help is needed critically by the Prime Minister for a certain task, and Ojha sends his man, Irfan to work with them and start an investigation from within their department to avoid being caught, as the investigation in question is against the notorious criminal King, who has recently stolen jewels from a jewelry house owner Mehta, and has claimed that his next target would be the Rashtrapati Bhavan. For the same, a hacker from the technical department, named Raj, is chosen to decipher messages of the gang.

Hamid and Irfan go on to investigate a street racing gang whose members have been striving hard to get close to King. The gang, composed of the leader, Tara and her associates and friends Bikki and Naina, indulges in illegal street racing, and while Irfan speculates that a certain Arjun can infiltrate the gang and earn more information on King, a man appears out of nowhere. The man, Samar, disrupts Tara when she tries to meet a recent street race winner, and wins Tara’s trust by regaining the car given to him along with some money, when he loses both upon being caught by a policeman, Rathore. Through the very course of events that follows suit, Samar bonds well with Tara, Bikki and Naina, holidaying with the group in Israel for the next few days, when Irfan realizes, along with Singh and Hamid, during that several messages that they have been receiving ostensibly as customer care offer messages are actually coded messages. They ask Raj to decipher the railcode messages, and discover that King’s loot is located near the Gopigunj police station. Tara receives the message and sets out with Bikki and Naina to retrieve it, with the police, headed by Irfan and Hamid, in hot pursuit, when it is revealed that the infiltrator, Arjun, was part of the street racing gatherings, and has been able to take the lead against the trio, but Tara, Bikki and Naina are then saved by a mysterious entity, who is then revealed to be Samar himself. Admitting himself to be King, even as he used the name as a simple criminal alias to commit robberies, Samar gets the group going on the coveted Rashtrapati Bhavan robbery, which is aimed to get them their hands on Singh’s money, and their plan begins to work, but days later, much close to the heist, Irfan realizes that Raj was actually allied with King, and puts him to interrogation, hampering the hacking aspects of the group’s plan.

On the eve of the heist, Samar relays to Tara that he will legitimately convert the stolen money to diamonds and store them in the Museum of London, and even as Bikki and Naina get married, Samar gets an alternate plan ready to be executed. The heist works perfectly well when Irfan, Hamid and Singh are put off their guard, with Singh being knocked unconscious and her money stolen, but during the mighty escape to the airport, Samar stands to suffer a diversion upward on the highway that causes him to be caught up in a dead end, which is when Tara reveals to him that she is King, and it was impulsive for her to betray him for all his smartness. Irfan and Hamid catch up with Samar and arrest him.

Two months later, Tara has changed identity of a random Mrs. Khan, and goes to the Bank of London, with Bikki behind her, to store her diamonds in a vault. However, on the spot, she encounters Samar, who has also changed his identity as one Mr. Sharma, and she soon realizes that Irfan, who then appears before her, was actually Samar’s boss, and that Samar was let in on as the early Ojha. A shocked Tara, along with a helpless Bikki, then walks away with Samar and Irfan into the vault. Karan Johar is left washing utensils.

Be the first to review “Drive Dvd” Cancel reply