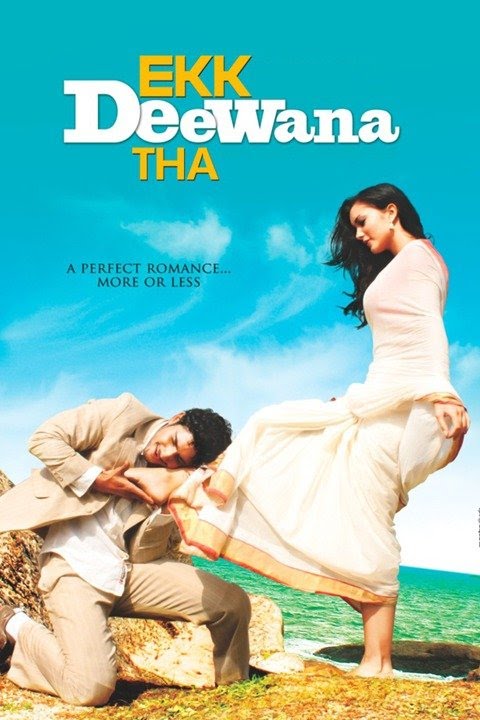 Sachin’s life changes when he meets and falls in love with Jessie, a girl hailing from a conservative Christian family. However, religious disparities continue to strain their relationship.

Ekk Deewana Tha (transl. There was a crazy lover) is a 2012 Indian Hindi romantic drama film, written and directed by Gautham Menon, featuring Prateik Babbar and Amy Jackson in her Bollywood debut, and in lead roles. The film is a remake of Menon’s own Tamil film Vinnaithaandi Varuvaayaa (2010) and features a reused soundtrack and film score composed by A. R. Rahman, while the cinematography and editing were handled by M. S. Prabhu and Anthony Gonsalves, respectively. Singer Chinmayi provided the talking voice of the female lead, reprising her role from the Tamil version and the Telugu simultaneously made version where she dubbed for actresses Trisha Krishnan and Samantha Ruth Prabhu respectively.

While in production, the film was titled Prem Katha, but was renamed as Ekk Deewana Tha, as the director wanted an abstract title for the film, similar to the original.

The film, produced by Fox Star Studios, a subsidiary of Hollywood studio 20th Century Fox, Photon Kathaas and RS Infotainment, was released on 17 February 2012 in two different versions with a number of endings to suit the taste of regional viewers. The film opened to universally mixed reviews and had a lukewarm reception at the box office.

Sachin Kulkarni (Prateik Babbar) is a student of mechanical engineering in Mumbai who aspires to become a filmmaker. His friend introduces him to cinematographer Anay (Manu Rishi). With Anay’s help, Sachin becomes an assistant to director Ramesh Sippy. Sachin’s family, who are Marathi Brahmins, rent Jessie Thekekuttu’s (Amy Jackson) house. Jessie is from a conservative Malayali Syrian Catholic “Nasrani” family from Alappuzha, Kerala, that lives upstairs. Sachin falls in love with Jessie the moment he meets her. Sachin tries to interact with Jessie, who is afraid of speaking to men around her strict father and ends up angering Jessie. Unable to hide his feelings for her any longer, Sachin confesses his love for her, to which she does not respond. A few days later, Sachin learns from his sister that Jessie has gone to Kerala to visit her grandmother. He, along with Anay, ends up in Kerala to look for her. After several days, he finds her, apologises and she introduces him to her family in Kerala as her “classmate”. Jessie denies she has any feelings for him but agrees to be his friend. On the train journey back home, however, the two get closer and share a passionate kiss. Sachin is convinced Jessie loves him; the two meet several times and Jessie begins to admit that she also likes Sachin, but wants to refrain from any problems because she knows her father wouldn’t give her hand in marriage to a Hindu. Consequently, due to various misunderstandings between Jessie’s brother and Sachin, her parents learn of their supposed affair. They fix a match and schedule her wedding. The day arrives and midway through the ceremony, Jessie refuses to marry the groom, displeasing everyone in her family. Sachin, who had, without anyone’s knowledge, come to Kerala to witness the wedding is ecstatic and secretly visits Jessie at her home. It is then that Jessie admits she has indeed fallen in love with him. Sachin and Jessie continue to love each other without the knowledge of their parents.

At this point of time, Sachin goes to Goa on a 40-day shoot, where he gets busy. Meanwhile, the topic of Jessie’s marriage comes up again at her home when the guy whom she refused to marry earlier pays them a visit. Panicking, Jessie calls Sachin and tells him that she wants to elope with him. Sachin, who he is travelling through less than ideal places, tells Jessie to stay in Mumbai for now, and that soon he would be back and they can discuss. Jessie stops taking Sachin’s calls and so he goes back one night to check on Jessie. He comes to know that Jessie has decided to break up, as the relationship is not peaceful due to her parents’ disapproval. She says she has agreed to marry a boy of her parents’ choice. When Sachin pleads her not to do it, she tells him that a time had come when she was willing to elope, but the moment was gone. She doesn’t want Sachin to wait for her, as he has his dreams to fulfill. Sachin later comes to know that she is married and settled abroad.

Two years later, Sachin meets Samantha (Samantha Ruth Prabhu). She falls in love with him but is rejected by Sachin who hasn’t yet gotten over Jessie. He then comes up with a script for his first film, which happens to be his very own love story. He calls upon an actor (Ashwin Kakumanu) as the film’s protagonist, Samantha as the female lead and Anay as the film’s cinematographer, and the film is eventually titled Jessie. While shooting for the film in Taj Mahal, he sees Jessie and she comes to speak with him. She admits that she is not married and is still in love with him, and he too says she is still in his heart. Sachin proposes yet again and they get married the same day. This is actually revealed to be the end scene in Sachin’s film – which Sachin and Jessie in real life are watching together in the theatre. After the film ends, Jessie praises Sachin for his efforts and the latter agrees to drop her home, implying that they are reunited.