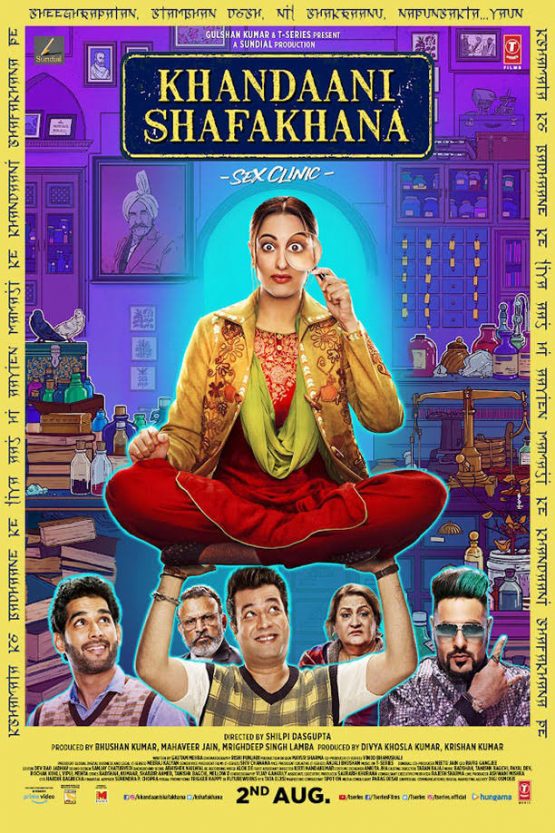 Babita Bedi, a medical representative and the sole breadwinner of the family, is asked to run a fertility clinic for six months. She must be able to sell it or she may lose everything.

Khandaani Shafakhana (transl. Familial clinic) is a 2019 Indian Hindi-language comedy-drama film directed by director Shilpi Dasgupta, and starring Sonakshi Sinha and Badshah. The supporting cast includes Varun Sharma and Annu Kapoor. Principal photography began on 25 January 2019, and it was theatrically released in India on 2 August 2019. It was considered as a box office disaster due to its poor commercial performance.

Babita “Baby” Bedi, a middle class Punjabi girl, is working as a medical representative and the only earner in the house. She gets constantly shouted at by her boss and is unhappy with her job. Her uncle, who had lent them money earlier, has his eyes fixed upon Baby’s house, which is the only remainder of her dead father.

One day she inherits her uncle, Mamaji’s wealth after he is killed by a man. His will states that Baby is the sole heir of his property and that she has to run a fertility clinic for six months in order to sell it or else she will lose everything. She will have to face many obstacles of this society that is conservative towards women.

In order to deal with her old job, she sends Bhooshit, her brother, in place of her, claiming 6 months’ sick leave. When she goes there she finds she has do a lot to keep the clinic alive.How she does forms the rest of the story

Be the first to review “Khandaani Shafakhana Dvd” Cancel reply