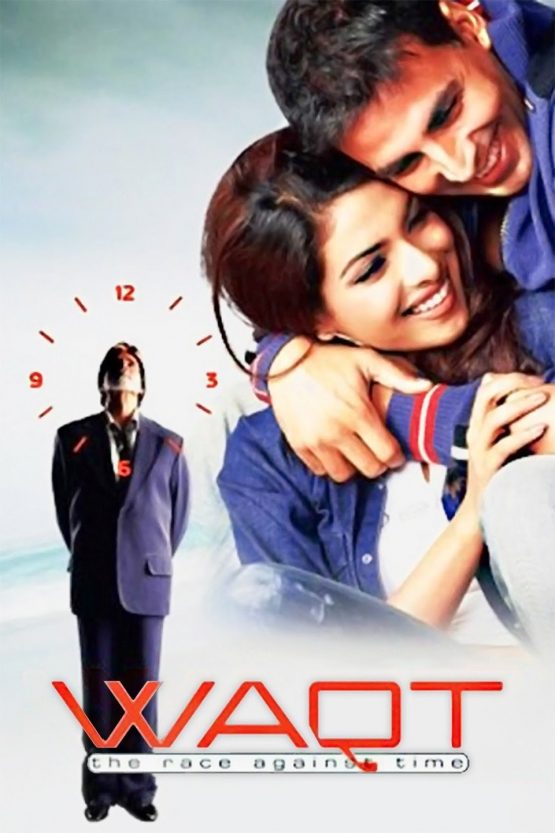 Waqt: The Race Against Time Dvd

A chronic illness leaves Ishwar with only a few months to live. To make his reckless son Aditya realise his responsibilities, Ishwar throws him out of the house.

Waqt: The Race Against Time (transl. Time) is a 2005 Indian Hindi-language comedy-drama film that was directed and produced by Vipul Amrutlal Shah. The film stars Amitabh Bachchan, Akshay Kumar, Priyanka Chopra, Shefali Shah, Rajpal Yadav and Boman Irani in the principal roles. The film, based on a Gujarati play by Aatish Kapadia, follows the journey of rich businessman who unexpectedly becomes very strict to his spoiled son to teach the latter life lessons before it is too late.The movie is based on the Gujarati play Aavjo Vhala Fari Malishu.

Shah wanted to make a film about a grounded father-son relationship that would differ from standard Bollywood father-son stories. After watching Kapadia’s play, Shah was impressed and bought the rights for a film adaptation. Kapadia adapted the film for the screen. Principal photography was done on the 14 sets at Filmistan Studio in Mumbai, and a song was filmed in Leh, Ladakh. The soundtrack was composed by Anu Malik with the lyrics by Sameer, except for 1 song Kapadia wrote. After the release of the album, the song “Do Me A Favour, Let’s Play Holi” became widely popular. Over the years, the song continues to be one of the most popular Holi songs.

The film was made on a production and marketing budget of ₹160 million and was released on 22 April 2005. It was a box-office success, grossing over ₹424.8 million, and became the seventh highest-grossing Bollywood film of the year. The film received 2 nominations at the 51st Filmfare Awards: Best Supporting Actress for Shah and Best Comedic Actor for Yadav. In addition, Shefali Shah won the Stardust Award for Best Supporting Actress for her performance.

Spouses Ishwar Thakur(Amitabh Bachchan) and Sumitra Thakur (Shefali Shah) run a toy factory together. Their son Aditya(Akshay Kumar) has no interest in taking responsibility for or the direction of his life. The situation deteriorates when Aditya elopes with his girlfriend Pooja(Priyanka Chopra), the daughter of Natu (Boman Irani). Natu who doesn’t wants it has habit of saying ” Ye Toh Kuch Bhi Nhi Hai (This is nothing). So however when Ishwar asks sorry he tells his dialogue and he touches his feet. Even they have to face the comical servant Laxman (Rajpal Yadav)

When Pooja becomes pregnant, Ishwar and Sumitra decide to force Aditya to take responsibility for himself because he has to take care of his wife and child. Aditya’s parents drive Aditya and Pooja out of their house and into a room behind the house in the garden. Aditya grows to resent Ishwar, and the two become estranged. During this time, Aditya finds his role in life.

Aditya, who has become a responsible man, discovers Ishwar has lung cancer when the latter attends Aditya’s performance on stage. Aditya asks the audience to pray for his father to live to see his child’s birth. Those prayers come true, and Ishwar names the child, a boy, after himself. After Aditya’s father dies, Aditya welcomes children at his father’s toy factory and in the presence of his family—including the toddler Ishwar—plays with a lonely, disabled boy. The spirit of the elder Ishwar touches the flowers in Sumitra’s hair, reminding her of times past.

Priyanka Chopra as Pooja Aditya Thakur
Shefali Shah as Sumitra Thakur
Boman Irani as Nattu Bhai, Pooja’s father, who has habit of telling “Ye toh kuch bhi nhi hai” and has to face servant Laxman and owns knife and sticks factory
Rajpal Yadav as Laxman, Comical Servant, who always ask questions from everybody. All are teased from him especially Natu
Asawari Joshi as Ashalata, Pooja’s mother
Benjamin Gilani as a Director
Anu Malik (Cameo) as a DJ in the song, “Miraksam”

Be the first to review “Waqt: The Race Against Time Dvd” Cancel reply