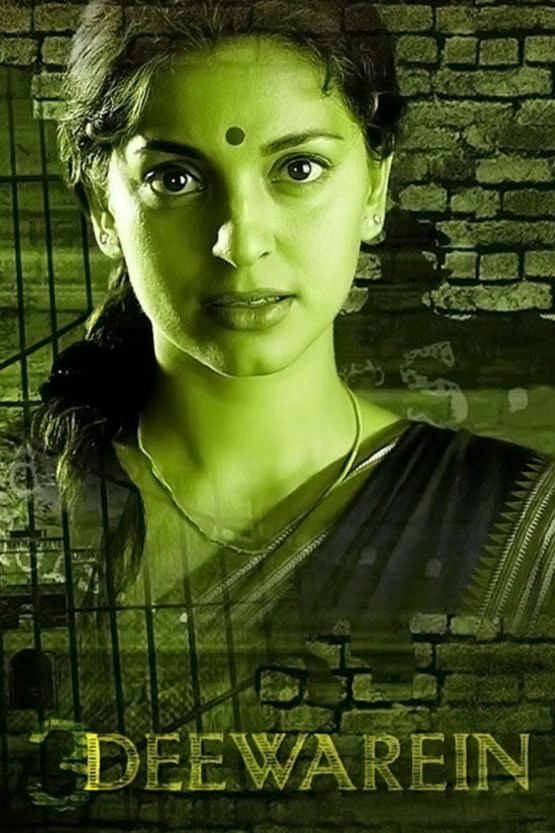 Chandrika decides to make a documentary on the three inmates on death row. Gradually, they start reforming themselves while Chandrika, too, finds redemption in her life.

3 Deewarein (lit. ‘3 Walls’) is a 2003 Indian Hindi crime film written, directed and co-starred by Nagesh Kukunoor. Juhi Chawla, Jackie Shroff, Naseeruddin Shah and Gulshan Grover form the rest of the cast. The film narrates the story of three prisoners and a documentary filmmaker who, while filming their reformation story in the prison, finds redemption with her own troubled marriage. The film was showcased among the Indian panorama section, at the 2003 International Film Festival of India.

The film was also premiered at the Kolkata Film Festival. After having been screened at the Indian Film Festival of Los Angeles, where it was well received, the film was screened at the Commonwealth Festival at Manchester, it was nominated as one of the top five films, at the gala presentation. Nagesh Kukunoor has also received the Filmfare Award for Best Story.

Three men are on death row. Jaggu (Jackie Shroff), a lawyer and a poet, is serving a sentence for murdering his wife because she was cheating on him with another man. Nagya (Nagesh Kukunoor), a man angry with the whole world, is arrested for murdering his wife too, but he claims that it was an accident where she falls off the sidewalk while they were in the middle of a heated argument. Ishaan (Naseeruddin Shah), a happy-go-lucky man, is also arrested for murder that he commits while in the act of robbery. The prison’s custodian is Mohan (Gulshan Grover), who attempts several methods to reform the prison’s inmates. A documentary filmmaker, Chandrika (Juhi Chawla) comes to the jail to set a film about these three men. In the process, she finds redemption to her troubled marriage.

Apart from Bollywood Calling, which featured veteran actor Om Puri, Kukunoor’s previous films such as Hyderabad Blues (1998) and Rockford did not feature mainstream actors. In this film, Kukunoor felt it exciting to cast and work with several established actors such as Jackie Shroff, Naseeruddin Shah and Juhi Chawla. While writing the script for the film, Kukunoor kept Chawla in mind for the character of Chandrika. He did so because he wanted Chawla’s “naive honesty” to be fashioned into the character. Though Chawla was typecast in light-hearted roles in her acting career, Kukunoor chose to go against the norm by casting her in a serious role.

The rest of the characters were cast after the completion of the script. Kukunoor did not have to convince the actors for agreeing to be cast in this film. He only depended on his script. Although the character of Ishaan was initially written to be that of a man in his thirties, he could not find a suitable actor during the casting stage.

During the filmmaking, Kukunoor’s experienced contrasting working styles of the actors. While Shroff preferred specific instructions from him, Shah came to him with very specific ideas. Kukunoor was full of praise for Chawla because of her suggestions during the shooting.

Be the first to review “3 Deewarein Dvd” Cancel reply